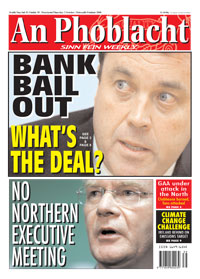 THE 26 County government introduced emergency legislation in the Dáil on Wednesday night in reaction to the current economic and financial crisis.
Sinn Féin has tabled an amendment to the Credit Institutions Bill demanding a levy be charged to banks for the term of the bank bailout deal and has also demanded that government immediately outline the ‘conditions’ agreed with the banking sector.
The 17-page Credit Institutions (Protection Bill) 2008, which gives effect to the Government’s scheme to underwrite and guarantee the banking system is, according to Finance Minister Brian Lenihan, “intended, in the first instance to underpin the financial standing of the Irish banks and building societies”.
Lenihan insisted the provisions “are in no way a ‘bailout’ for the Irish financial system. The granting of guarantees to individual institutions will be subject to specific terms and conditions for each institution”.
He also said that “total assets of the six financial institutions concerned exceed their guaranteed liabilities by approximately €80 billion – half of Ireland’s total GNP. By any measure, there is therefore a very significant buffer before there is any question of the guarantee being called upon”.
Lenihan introduced the Bill at 10pm on Wednesday night after repeated delays.
Outlining the Bill’s main provisions, Mr Lenihan said it would not interfere with the functions of the Central Bank or financial regulator and that it had scope to address any difficulty which might arise.
But Sinn Féin Finance Spokesperson Arthur Morgan TD tabled an amendment to the Bill. The Louth TD said:
“Sinn Féin wants to support the Credit Institutions Bill. Stabilising the state’s financial sector and ensuring it can continue to trade on the international stage is crucial. However the government’s refusal to outline in detail the ‘conditions’ and ‘schemes of the guarantee within the Bill is simply not acceptable.
“This is an issue of trust. Do I trust the government to ensure the ‘conditions’ of the guarantee agreed with the banks are sufficient to protect and benefit the state? Going by their record to date, absolutely not!
“The current finance crisis is of the sector’s own making and the government has facilitated it by refusing to put in place adequate regulations to protect ordinary investors from the finance sector’s reckless practice of buying and selling cheap money. Government refusal to intervene before now has allowed the sector to assist government policy of falsely inflating property prices, leaving the economy fundamentally more exposed than any of its European partners during the current global finance crisis.
“I have tabled an amendment to the Bill demanding that a levy be paid by the banks for the insurance that this state has now offered them. I have also argued that bank management forego bonuses over the two years of the guarantee and indeed cut their exorbitant wages. There also needs to be a strict regulatory regime introduced to monitor bank practice during the next two years and further regulation beyond the time commitment of the Bill.
“Sinn Féin is also calling on government to introduce a mortgage security package. Home owners deserve the same protections afforded the banks. The conditions agreed with the banking sector must include a moratorium on home repossessions while this guarantee stands with every possible measure taken to reschedule mortgage payments and importantly initiatives such as the writing off of negative equity. A proportion of money raised by a bank levy should be redirected to MABS, the state agency that is currently dealing with people suffering in the mortgage market.”