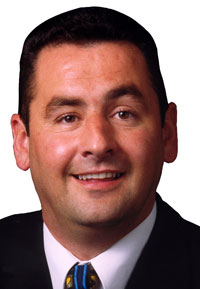 SOUTH DOWN Sinn Féin MLA Willie Clarke and Down Councillor Mickey Coogan have welcomed last week’s decision by the Parades Commission in the North to impose a determination on a loyalist band parade due to take place in Newcastle on Saturday, 13 September.
Willie Clarke said:
“Sinn Féin’s position is that this parade should not be allowed to proceed in a mainly nationalist town where they are not welcome. Neither the business community nor the majority of Newcastle residents want the inconvenience of this parade imposed on them.
“With this in mind, we went before the Commission last week to request that this parade be stopped or at the very least a number of restrictions be imposed.
“We explained to the Commission that there was a history of participating bands displaying and wearing paramilitary flags and emblems and playing sectarian music and that the timing of the parade from 7pm-11pm on a Saturday night was totally unacceptable. We also made clear that there has been an unusually high number of parades in Newcastle this year due to the main demonstration on 12 July being held in the town and that the parade organisers had made no attempt at entering dialogue with either the local business community or local residents.
“We will be meeting with the PSNI this week to discuss the Commission’s determination and how they intend to police the parade. We will also meet with business owners and residents to ensure their concerns are addressed.”
An Phoblacht
44 Parnell Sq.
Dublin 1
Ireland