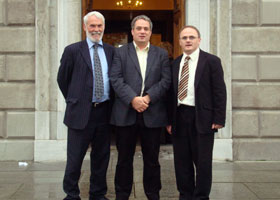 SINN FÉIN MLA and Chairperson of the Northern Assembly’s Committee for Culture, Arts and Leisure Barry McElduff told an Oireachtas committee this week that he expects a decision on the issue of a multi-sports stadium at the Long Kesh site in the near future.
McElduff addressed the Joint Oireachtas Committee  on Arts, Sport, Tourism, Community, Rural and Gaeltacht Affairs on Wednesday, 10 September.
McElduff was joined by fellow Sinn Féin committee member Francie Brolly MLA. Sinn Féin Dublin TD and arts and culture spokesperson Aengus Ó Snodaigh also attended the meeting.
During his presentation Barry McElduff highlighted a number of shared issues between the two institutions.
“Our committees share an interest in a number of North/South bodies such as Foras na Gaeilge and Waterways Ireland. My committee has received presentations from these organisations and will be interested to watch developments on the Ulster Canal,” McElduff told the joint Oireachtas committee.
He pointed out that an Irish Language Act has exercised the Assembly committee and has been a high-profile issue. The Department is now minded to produce a strategy for indigenous language which will include Irish and Ulster Scots.
He said that the committee is also concerned about local East/West and North/South infrastructure imbalance in the areas of sport and culture.

BROADCASTING
“In addition, although not a devolved matter the committee is watching developments in the area of broadcasting. It has received a presentation from the Office of Communications (OFCOM) about what the future holds for local broadcasting.”
He said that the committee is keen to build relationships with other legislatures. As part of its inquiry into underfunding of the arts, the Assembly committee has plans to visit Cork and Galway, two of the state’s capitals of culture.
“Perhaps of interest to the members here in Leinster House, the committee is looking at ways to make the arts more available. The committee met with JJ Murphy, an actor who worked for many years in the Lyric Theatre, and Drew McFarlane of Equity. The National Theatre of Scotland was suggested as a good example of how a theatre without walls can bring arts to the people at home and abroad. The committee are looking forward to the re-opening of the Lyric Theatre and intend having round-table talks in the next couple of months with representatives of the Arts Council, the Lyric and the acting profession to see how this can be taken forward,” McElduff said.

Long Kesh site
McElduff told the Oireachtas committee that the proposed multi-sports stadium has been another substantial and high-profile item of business for the Assembly committee. He said that the Long Kesh site was given to the North’s Executive by the British Government and is the only site that has emerged from consultations with many organisations.
“Importantly, among these were the governing bodies of the three sporting bodies ie the GAA, IRFU and soccer. All supported the stadium being built on the site,” McElduff said.
He added that the committee carried out its own scrutiny of the entire process and heard evidence from many sources.
“The Minister is due to make a statement in the Assembly in the not too distant future and had promised to share his decision with the committee prior to doing so.”
An Phoblacht
44 Parnell Sq.
Dublin 1
Ireland