Hunger strike and arrests at sea as Shell ship arrives 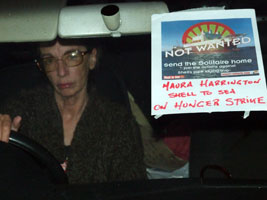 GARDAÍ arrested local fishermen off the Corrib coast in County Mayo on Wednesday for being near the world’s largest pipe-laying vessel, brought in by the Shell multinational oil giant to develop its controversial gas pipeline.
And as the Garda was being used to defend the oil giant’s interests, local schoolteacher Maura Harrington has gone on hunger strike in front of the Shell compound, vowing to refuse food until the Shell-contracted ship leaves the area.
The ship at the centre of this latest episode in the long battle against multinational exploitation, the Solitaire, arrived off the coast of Mayo this week. The ship is accompanied by a number of Shell support craft, a Garda Water Unit and the Irish Naval Service.
Hundreds of gardaí have been drafted into the area, the main road to the beach has been closed, and internet access in the area near the Shell compound has been cut off.
Locals have been alarmed at the draconian security operation in progress, particularly by the presence of figures in green rainjackets who have not been identified as gardaí.
Opposition to the pipe-laying operation includes local fishermen who are worried about contamination of the waters they depend on, residents concerned that the offshore section is being put in place while no planning permission exists for the onshore section, and environmental and political activists based in the solidarity camp.
Gardaí are threatening to detain anyone on any craft that approaches the path of the Solitaire. Fishermen from nearby Porturlin who refused to move their crab gear from the path of the Solitaire were arrested on Tuesday night. A large group of local people protested outside the police station in Belmullet at the arrests.  The men were released at midnight, went fishing again on Wednesday morning, and were immediately rearrested. Protesters are engaged in a series of actions designed to slow the project.
In recent weeks there have been 29 separate arrests in the area around Glengad beach, where the pipeline is due to make landfall. While some newspapers have claimed that the project - which is being carried out by a consortium of companies including Statoil from Norway and Marathon Oil from Texas in the United States - will benefit Ireland, even though all of the natural gas will belong to the Corrib partners and no royalty will be charged, there is no contractual obligation for Shell, the scheme’s major shareholder and operator, to sell any of the gas to Bord Gáis Éireann, and so the resource will be sold to the highest bidder.
Bord Gáis has confirmed that there will be no financial benefit to Irish consumers from the Corrib gas field.
Environmentalists have warned that Shell will use the precedent of an onshore refinery to strong-arm their way into installing similar schemes in other places around the world. A production pipeline passing through a residential area is unprecedented.
The Irish Government, including Green Party ministers at the Department of Environment and Natural Resources who opposed Shell before going into government, has backed Shell’s scheme. Last month, the Garda released figures showing that €11 million has been spent policing the project since 2006 - more than half the amount the force spent on fighting organised crime.
Activists on the ground have asked for solidarity actions such as pickets and lobbying of Green Party politicians in Ireland, Britain and mainland Europe to take place in solidarity with the people of Mayo and against the actions of the Shell multinational oil giant.
Sinn Féin TD Martin Ferris has strongly condemned  the  arrest  of  fishermen in  Broadhaven  Bay and called  on the Green Party members of the Government,  prominent  in    support of the Rossport Five in 2005, to use their  influence  to bring an end to the heavy handed treatment of local protesters.”