Government must legislate for collective bargaining 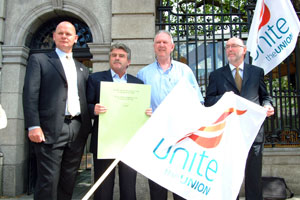 RECOGNITION: Unite the Union at the Dáil for the launch of Sinn Féin’s Bill for trade union recognition

TALKS aimed at securing a new pay deal in the 26 Counties resumed at Government Buildings in Dublin this week.
While trade union representatives and employers seemed as far apart as ever on issues, they have set Friday as a deadline for agreement.
As talks - expected to concentrate on non-pay issues such as collective bargaining rights - got underway on Tuesday, Sinn Féin Workers’ Rights spokesperson Arthur Morgan TD reiterated the party’s demand that the Government legislate for collective bargaining.
Speaking on Tuesday, the Louth TD said:
“Today’s pay talks will be focusing on non-pay issues such as the right to collective bargaining. However, it is the legislative responsibility of this Government to deliver on this demand.
“Fianna Fáil and their Government partners have so far refused to progress collective bargaining legislation through the Oireachtas. It is this refusal that has resulted in trade unions having to negotiate the demand through the pay talks process.
“In June, Sinn Féin launched a Bill to provide for the right to collective bargaining and mandatory trade union recognition. The Bill was jointly launched with Jimmy Kelly, regional secretary for the state’s second largest trade union, Unite. Unions such as SIPTU and the TEEU have also been vocal in the demand for workers’ rights legislation in this area.
“Significant cost of living increases must be addressed for the lower paid. This is not simply a moral debate - it is a bread and butter issue for hundreds of thousands of workers across this state who simply cannot afford to make ends meet. It’s about a fair day’s pay for a fair day’s work.
“The absence of the right to collective bargaining and mandatory trade union recognition impedes the ability of unions to protect and improve the rights of the workers, particularly the lower paid. Government must stop shirking its responsibility to workers and knuckle down to business in the area of workers’ rights. It has, at every turn, let workers down and this track record cannot continue.
“Brian Cowen needs to step up rather than sit back at this juncture of the pay talks.
“All stakeholders must adopt an innovative and compassionate perspective that incorporates the very real needs of the low-paid whilst acting responsibly to ensure the economy’s stability in the short-term.”
An Phoblacht
44 Parnell Sq.
Dublin 1
Ireland