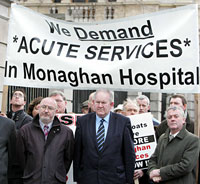 CATASTROPHIC SITUATION
“When read carefully, this missive, entitled ‘Developments in Cavan & Monaghan Hospital Group Services’ and dated 3 September 2008, reveals a number of inconsistencies, raising huge concern about future patient care. It speaks of having specific measures ‘in place and bedded down prior to or in parallel with the transfer of acute care to Cavan’ by the end of November. But what does ‘in parallel with’ actually mean?
“For example, the HSE says it is committed to the enhancement of ambulance services, including an additional 24-hour emergency ambulance at Monaghan Ambulance Station, bringing the number of ambulances from two to three. Will we be faced with a situation where acute care is removed from Monaghan before the extra ambulance is provided? How long would such a gap in services be allowed to continue? We have seen in the past where the HSE commits ‘in principle’ to provide new services but we wait months or years to see them delivered.
“The HSE has cleared up none of the contradictions contained in the ‘Transformation’ report as revealed last April.”
The Cavan/Monaghan TD explained that there are currently 3,000 acute medical admissions to Monaghan General Hospital per annum. By the end of November this service will have to be provided by Cavan General Hospital which already has to cater for 5,000 acute medical admissions per annum and has 160 per cent bed occupancy. “This is to be done under this plan without a single extra bed being provided in Cavan,” he said.
“Consultants at Monaghan General Hospital have stated in correspondence to the HSE that such a move would create a ‘catastrophic situation’ for patients and that deaths may well result. The consultants’ appeal not to proceed with such a plan was made on the assumption that an additional 25 beds would be provided at Cavan. The HSE intends to implement an even worse scenario with no extra beds provided to deal with the enormous additional burden on Cavan.
“The HSE is maintaining the fallacy that patient care will actually improve after the destruction of Monaghan General Hospital because there will be greater provision of non-acute care, rehabilitation, respite, step-down, etc. Yet the ‘Transformation’ report states that ‘additional funding is not available to implement these service changes’. We are being told there will be additional non-acute care at the same time as the HSE is imposing cuts on such care. More primary care is promised yet there is a GP shortage in this region.
“In addition, the financial constraints imposed by Government on the HSE are now set to be far worse than they were when the ‘Transformation’ report was revealed last April.
“In its letter to me of 3 September, the HSE says that it needs to provide 864 packages of care in the community or jointly between hospital and community involving 10 community-based staff being put in place within primary care. This would supposedly compensate for loss of in-patient beds at Monaghan. Even if this were the case - and I strongly contend that it is not - the current regime of cuts makes delivery of these ‘packages’ highly doubtful. Yet the HSE continues to work to its deadline of ending acute care at Monaghan by the last day of November.
“While a Medical Assessment Unit in Cavan General Hospital in itself would be welcome, it must be placed in the context of the overall reduction in acute beds between the two hospitals and the loss of services which the downgrading of Monaghan will entail. A huge additional burden will be placed on Cavan, where staff are already stretched to the limit.
“The plan for the destruction of Monaghan General Hospital must be opposed in the strongest possible manner by the entire community and every elected representative must be called to account.”