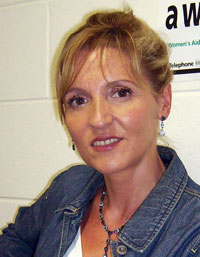 PSNI Chief Constable Hugh Orde has been accused by a Sinn Féin member of the Policing Board of attempting to railroad Tasers into operation despite a pending court challenge into use of the controversial weapon.
Foyle MLA Martina Anderson confronted the PSNI Chief Constable during a meeting of the Policing Board, slamming his decision to pilot the Taser before a full Equality Impact Assessment has been carried out.
“Prior to the summer recess papers were lodged in the High Court seeking leave for a judicial review against the use of Tasers in the North,” Martina Anderson said.
“Despite the chief constable being fully aware of being the named respondent, he proceeded to use Tasers rather than wait for the outcome of the hearing before deploying the weapon.
“This was a cheap and cynical attempt to railroad the use of Tasers into the PSNI armoury with total disregard for the authority of the court.”

SAFETY QUESTIONS
The Taser is marketed as a non-lethal stun gun but - like the plastic bullet before it - serious questions have been raised about its safety record.
Since the introduction of the Taser four years ago in Canada and America, 300 people have been killed as a result of the weapon’s use.
The PSNI used a Taser in the North for the first time last week and its deployment sparked immediate controversy after the victim had to be admitted into hospital.
Declan Smith was taken to Altnagelvin Hospital after the barb used to deliver the electric shock from the Taser gun was embedded in his chest.
The controversy continued after medics attending the 37-year-old Derryman admitted they did not know how to remove the barb. PSNI technicians had to be contacted before doctors would operate.
Martina Anderson said she was deeply concerned that medical staff had not been properly briefed about appropriate medical care prior to the PSNI’s deployment of this dangerous weapon.
Anderson also questioned the validity of the claim by the PSNI that a hostage-type situation was the instigation of the use of a Taser on the Derryman.
“The PSNI gave a commitment to only use Tasers in potential life-threatening situations yet such a claim appears inconsistent with the incident in Derry where the PSNI used the weapon for the first time.
“I would question whether the PSNI was obliged to use force as an absolute necessity and believe that the PSNI used excessive force to resolve thisincident.”
Declan Smith, who has a history of domestic violence and mental health issues, was in a flat with two of his children and is believed to have issued threats during an incident involving his partner.
The PSNI has classified the incident as a hostage situation in an attempt to justify the deployment of a Taser. But, significantly, Declan Smith was shot and incapacitated by the Taser as he emerged from the flat.
Martina Anderson said:
“There is no doubt that a domestic incident arose. However, the PSNI response was excessive. The PSNI acted in a calculated and cavalier manner and outside the guidelines that Hugh Orde promised the Policing Board.”

TOTAL DISREGARD
The PSNI chief constable said he could not comment on a case which is now being investigated by the Police Ombudsman but rejected that the PSNI had deployed Tasers in an irresponsible way.
However, as the Sinn Féin MLA pointed out, the PSNI had ignored the concerns of human rights advisers who warned that, once deployed, the PSNI would ignore guidelines that restrict the use of Tasers to life-threatening situations.
Martina Anderson added:
“It appears that our concerns have been vindicated the very first time the Taser has been deployed by the PSNI.
“It seems that PSNI officers are prepared to flout their own guidelines from the outset, while the chief constable demonstrated total disregard for the Policing Board.”
An Phoblacht
44 Parnell Sq.
Dublin 1
Ireland