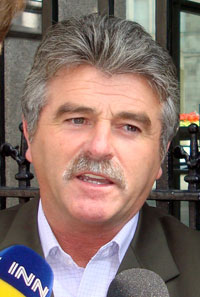 THE Irish Government announced last week that it was bringing forward the 2009 Budget to next month from December in response to current economic difficulties. Finance Minister Brian Lenihan will now reveal Budget 2009 on 14 October.
Recent exchequer figures for the 26 Counties have shown a deficit of €8.4 billion for the year so far.
Responding to the Government’s announcement, Sinn Féin Economic spokesperson Arthur Morgan TD discredited the Finance Minister’s analysis of the public finance crisis and called on him to immediately introduce a strategy to stabilise the economy and public finances.
The Louth TD said that bringing forward the 2009 Budget is in itself evidence of the depth of the public finance crisis the Government and the state face. But he challenged ministers’ claims about the causes of the problems.
“Minister Lenihan’s claims that the unprecedented economic circumstances are solely due to international factors and a contracting construction sector do not stand up to scrutiny. Whilst there is no doubt the global fuel, food and finance crises are factors in the challenges our economy now faces, what sets us apart from our European partners is this Government’s failed economic policies.
“They failed to take on board warnings that the public purse was and continues to be over-dependent on revenue generated from construction and consumption.”
The Louth TD said that by failing to recognise the implications of the likely contraction in the construction sector and also the widely forecasted rise in unemployment, the Government had based its Budget 2008 on unrealistic figures.
“It has also sat back over the last seven years and allowed economic growth be driven by domestic consumption rather than by exports.
“Job losses at 6.1 per cent are now at the highest level in ten years, which has impacted on Government revenue from income taxes and also from consumption taxes and critically are resulting in a higher bill for social welfare assistance payments. Failure to address the cost-of-living pressures on the low paid and those reliant on social assistance will further impact on Government revenues with regard to spending taxes.”

REORIENTATION OF THE ECONOMY
Morgan said that in the short-term, Government must introduce a strategy to stabilise the economy and public finances. It must stimulate growth in the medium term and look to advance a fundamental reorientation of the economy in the longer term.
“Taking on board these realities, the Government cannot look to the low paid and unemployed to carry the can for its failed policies. It must take action to reduce the cost- of-living pressure on the low paid and those dependent on social welfare.
“Government needs to start talking about job creation and enterprise. Workers from the construction sector must be redirected into alternative employment such as infrastructure projects and specialist construction, for example renewable energy.
“Government and its agencies must address the state’s underperforming export market, where 94 per cent of exports are currently from multinational corporation bases and not indigenous industry. Domestic and EU policies that are resulting in the haemorrhaging of jobs and businesses, as we have seen at Cappoquin Chickens, must be addressed.
“Critically, Government must not cut back on essential infrastructural projects. Proceeding with key infrastructural projects will increase our competitiveness. It also provides employment, keeping workers off the dole queues and contributing to the exchequer.”
An Phoblacht
44 Parnell Sq.
Dublin 1
Ireland