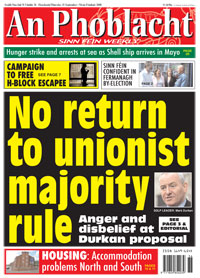 THERE is widespread anger among republicans and nationalists over suggestions made last weekend by SDLP leader Mark Durkan that mandatory power sharing in the North - a key part of the Good Friday Agreement and a cornerstone of the Peace Process - could be ended and that there could be a return to majority rule.
The North’s Deputy First Minister Martin McGuinness expressed his amazement at Durkan’s comments that power-sharing arrangements in Stormont should be scrapped.
Martin McGuinness said:
“It amazes me how the leader of the SDLP would take up and argue the position of unionists over the past ten years that the mandatory coalition should be ended. The position he has adopted is effectively throwing his weight behind the likes of Jim Allister and other anti-Peace Process elements.
“The Partnership Arrangements as defined by the Good Friday Agreement were supported overwhelmingly by the people of Ireland, North and South; this proposal from the leader of the SDLP is a total recipe for disaster.
“What Mark Durkan is suggesting is an abandonment of the principles of the Good Friday Agreement and essentially an abandonment of the rights and entitlements of nationalists and republicans as secured by that agreement.
“This disastrous U-turn by the SDLP indicates how willing they appear to be to surrender to the DUP and others’ demands for a return to unionist majority rule.”
He said the position articulated by Durkan is evidence of “a desperate desire by the SDLP to get into power without the actual mandate to do it”.
In Enniskillen on Monday, 8 September, where he was canvassing in support of the party’s Enniskillen by-election candidate Debbie Coyle, Sinn Féin President Gerry Adams also criticised Durkan’s revelation of a major abandonment of the SDLP’s position on power sharing and of the institutions set up under the Good Friday Agreement.
“What is being proposed by the SDLP leader is the abandonment of the principles of the Good Friday Agreement, and the principles of equality and of partnership government, and the protections these provide for citizens. Many nationalists will be deeply troubled by these ill-considered and irresponsible comments, which would effectively accept a return to unionist majority rule,” Adams said.
Durkan’s fellow Foyle MLA, Sinn Féin’s Martina Anderson, accused Durkan of indulging in “fantasy politics”.
“I am absolutely astounded that Mark Durkan is supporting the scrapping of vital safeguards which are there to guarantee the democratic rights of the nationalist community,” Anderson said.
She pointed out that in the 40th anniversary year of the Civil Rights campaign, the SDLP leader is advocating the removal of the safeguards that were painstakingly secured in prolonged negotiations culminating in the Good Friday Agreement.
“Does Mark Durkan expect anyone to believe that unionists are ready to accept equality and the needs of the nationalist community as a normal part of politics here? If this is the case then Mark needs to explain to the nationalist electorate exactly what he bases this belief on,” Anderson said.
The Sinn Féin Equality spokeperson said that the DUP had shown over recent times that they are in a place that they don’t want to be - sharing power with republicans and nationalists. She said that they have demonstrated that even with the safeguards in the Agreement for all citizens, including unionists, that they will not voluntarily deliver on their commitments.
“It is only because of Sinn Féin’s determination and leadership within the Executive that they are being forced to move,” she said.
Anderson continued: “Mark’s latest foray into fantasy politics reflects a penchant for sound bites rather than sound thinking. The SDLP leader’s assertion that the proposed Bill of Rights would afford sufficient protection for the rights of nationalists and republicans does not stand scrutiny.
“Unlike Mark, I was a member of the Bill of Rights Forum so I know from first-hand experience the kind of resistance we faced from the unionist parties in terms of securing a strong Bill.
“That process is still not complete; therefore we still haven’t seen the final document. I want to see a strong, enforceable Bill of Rights, which would be complementary to the safeguards in the GFA. Not one or the other but both.
“And contrary to what Mark would like people to believe, Sinn Féin negotiated changes to the Ministerial code not to exclude any party from office but to close the loopholes.
“Under the new code the opt-out position that the DUP operated under the Trimble/Durkan administration was removed. The DUP, as are all parties, is now obligated to attend all Executive and all-Ireland Ministerial Council meetings and fully participate in partnership government.
“For someone who regularly gives the impression that he negotiated the Good Friday Agreement single-handedly, Mark obviously does not understand it. Just so that he is clear what it says about Ministries I would point out that the 1998 Act clearly states that ministerial offices shall not exceed 10 and that if there is to be a new department or an existing one dissolved, it can only be done with approval by the Assembly passed with cross community support - so he clearly does not understand the Good Friday Agreement.
“When, not if, Sinn Féin has policing and justice powers transferred to the Executive that is the basis that it will have to be dealt with. No party has an absolute right to the Justice Ministry.”