Bill of Rights: 'Get it right,' says conference 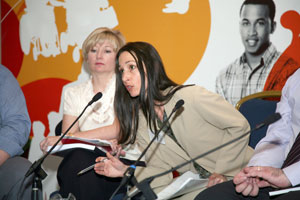 A BILL OF RIGHTS for the North remains one of the most important undelivered aspects of the Good Friday Agreement.  Ten years on, members of the Human Rights Consortium gathered at a Belfast conference to analyse recent developments and establish what is now required for ‘Getting the Bill Right’.
Participants representing the leadership of over one hundred diverse NGOs, community groups and trade unions identified a series of benchmarks against which to measure any future Bill of Rights:

It was agreed that the Bill of Rights Forum process, established under the St Andrew’s Agreement, and the Forum’s Final Report delivered to the North’s Human Rights Commission in April of this year, were positive and useful as an inclusive engagement providing a common frame of reference for the purposes of getting all parties to declare specific positions on all issues, and because the final document is not a weak, lowest common denominator agreement. However, participants also agreed that the value of the Bill of Rights Forum outcome is limited by resource and time constraints and by the lack of real movement towards consensus by parties who remain to be convinced of the legitimacy of rights-based governance despite growing demand from their own community.
The Human Rights Commission will consider the Forum Final Report and make its final recommendations on the Bill of Rights to the British Government by 10 December 2008 – International Human Rights Day and the 60th anniversary of the Universal Declaration of Human Rights.
Following this, the British Government will draft legislation following an 8-12 week public consultation period. This means that this Bill could be in the public domain and advancing towards law as early as 2009-2010.

MOMENTUM
Republicans and others have successfully injected fresh momentum into the Bill of Rights process but the question remains: is it a good idea to rush the process now that it has been reactivated?
Mohammad Abu-Harthieh, representing the Office of the UN High Commissioner for Human Rights warned the conference against this.
He urged that precisely because a Bill of Rights has great post-conflict potential as a unifying instrument sufficient time should be taken with a public awareness process and that achieving the necessary buy-in ‘across the community’ will require dedicated comprehensive conscientisation initiatives and sustained dialogue.
Sinn Féin’s Shannonbrooke Murphy, a party delegate to the Forum, agreed, telling the conference:
“We are now perhaps one quarter of the way through the Bill of Rights process and the year ahead is the crucial period.  If we have the courage to be ambitious, there is huge potential for this Bill to change utterly the human rights landscape internationally as well as here at home.
“Precisely because this Bill has the potential to help finally realise rights for all in this jurisdiction – but also because it equally has the potential to fail the people and bring disgrace upon the process if we get it wrong, or if we seek or achieve too little – it is imperative that we take sufficient care to get it right.”