Government responds to downturn with cutbacks in health 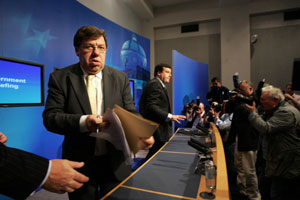 CUTBACKS in health spending and in aid for poor countries will form part of government plans to save money in the wake of the downturn in the Irish economy.
At a jopint press conference on Tuesday, Taoiseach Brian Cowen and Finance Minister Brian Lenihan announced plans to save €440 million this year and committed the Government to saving a further €1 billion in 2009.
They propose saving  €50 million through an efficiency review; €21 million from a cut in the budget for public relations, advertising and consultants; €10 million from a decision not to take the ministerial special pay award and the cancellation of the remaining part of that award for senior civil servants, state agency chiefs and judges.
Another €360 million is due to be found through departmental savings. The biggest element of this will come from the Department of Health and Children, where savings of €144 million will be made, with about €80 million of that coming from the postponement of the Fair Deal nursing home scheme. Further cuts will be announced by the Health Service Executive next week as part of its drive to keep within its budget.
In other departments, the biggest savings are planned from the Office of Public Works with €75 million coming in the area of public procurement, particularly through the row back in the decentralisation programme. A reduction of €45 million in the Overseas Development Aid budget, a cut of €40 million in the Gateway Investment Fund and savings of €10 million from Fás are also planned.
Responding to the announcement, Sinn Féin’s Economic Affairs spokesperson Arthur Morgan TD said cutbacks are not the answer to current economic woes. Mounting evidence showed that unannounced cutbacks are already impacting on health and education services.
The Louth TD said the Government was trying to create the impression that it is dealing with the economic difficulties and that it was clear everyone would have to wait until December’s budget to see how exactly the government intends to deal with a huge revenue shortfall.
The government had not publicly accepted the mistakes made in the management of the public finances.
“Income and other taxes were cut to levels which are not sustainable causing the Exchequer to become precariously over dependent on revenue related to construction and consumption. This was done in spite of repeated warnings about the dangers inherent in such a policy. This is why the state is experiencing a collapse in public finances.
“The answer is not cutbacks. Increasing stealth charges and taxes will further damage the economic situation by pushing up the cost of living. Public spending cuts that undermine public services and hurt the most vulnerable should not be the first thing the Government turns to. Quality public services are recognised as necessary for competitiveness – they are key to our future economic recovery.
“If the state requires extra revenue to fund essential public services then that revenue must be raised in a fair, transparent and accountable manner with the burden falling on those who can afford to pay.
“The Government needs to outline the measures it will introduce in the short-term to stabilise the economy, to put forward a medium term recovery plan and for the planning to start now for a longer term re-orientation of the economy that ensures that in future it is built on solid foundations and that future prosperity is used to eliminate inequality.