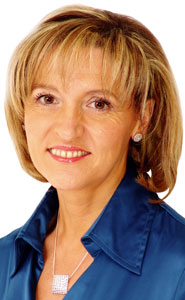 SINCE Sinn Féin joined the Policing Board, up to 18 PSNI members have been sacked for breaking the law or breaching police discipline.
Speaking to An Phoblacht, Sinn Féin’s Martina Anderson, who represents the party on the Policing Board, said that since Sinn Féin joined the Board “there is now a much greater focus on ensuring police officers who break the law are dealt with properly”.
And An Phoblacht has learned that, since August 2007, up to 60 PSNI officers, from reserve constable to chief inspector, have been or are being investigated for a range of allegations.
The allegations involve accusations of child abuse, possession of child pornography, perverting the course of justice, drink driving, fraud and perjury, as well as excessive use of batons and threats to kill.
As well as the 18 PSNI members who have been dismissed, a number of others, found guilty of the charges laid against them, have been redeployed.
Anderson also pointed out that “confidential investigations” are being carried out into a number of high-ranking PSNI officers, that Sinn Féin regards this with serious concern and will be focusing on the outcome of these investigations.
Meanwhile, the Police Ombudsman has “substantiated” claims against PSNI members accused of punching a Derry man, his 16-year-old son and a neighbour before dousing them with CS spray while they were handcuffed.
In a letter to the family, the Ombudsman says that no further action will be taken against the PSNI officers involved.
The incident, which happened on 27 July last year, saw Paul Ward, son Patrick and neighbour Jason Furey arrested and charged with resisting arrest and assault.
The charges were dismissed in May and it emerged in court that CS spray canisters and an evidence log book had gone missing.
Martina Anderson said:
“The message must go out that this type of activity will not be tolerated.
“Since Sinn Féin joined the Policing Board, there has been a much greater focus on ensuring that police officers who break the law are dealt with properly.
“The PSNI must put itself beyond reproach if it is to win public confidence and the Policing Board must not be found wanting in dealing with these difficult matters on behalf of the public and indeed those police officers who wish only to provide a first-class police service.”
An Phoblacht
44 Parnell Sq.
Dublin 1
Ireland