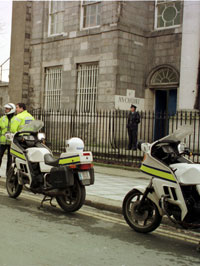 WITH the support of Fine Gael, Labour and so-called ‘Independents’, the Fianna Fáil/Green/PD Government has again renewed draconian measures contained in sections of the Offences Against the State Acts. Only Sinn Féin’s four TDs opposed the Government motion and proposed a Bill for the repeal of the Acts.
Sinn Féin Dáil leader Caoimhghín Ó Caoláin said at the Dáil’s Order of Business on 19 June that this “so-called emergency legislation” on the statute book since 1939. He said:
“The element proposed for renewal today comes up every year. I am of the view very strongly that it is neither appropriate nor justified to continue to renew emergency legislation in a very changed situation on the island of Ireland, and a very welcome change it is.
“It is important we recognise that emergency legislation and the entire raft of so-called Offences Against the State Acts dating from 1939 to 1972 and again since 1998, with this renewable series of sections, serve no good at this point and, arguably, have served no good at any time. It is not appropriate or justifiable to continue with this legislation with the Good Friday Agreement in place for ten years.”

DEMOCRATIC SCRUTINY
Sinn Féin Justice Spokesperson Aengus Ó Snodaigh spoke in the debate on the Government motion. He said:
“Once again I am imploring all deputies to consider the highly corrosive effect of this legislation on human rights, civil liberties and democratic life in this state before voting today.
“No emergency exists that could possibly justify the continuation of the draconian measures contained in the sections that are up for renewal or indeed the rest of the Offences Against the State Acts.
“Once again, this year the Justice Minister’s report on the operation of the 1998 provisions is lacking in the detail required to make an informed judgment of the operation of, the use or abuse of the 17 sections. Simply listing the number of occasions on which the various provisions have been used does not allow for informed democratic scrutiny of their operation.
“The non-emergency operation of this legislation is in violation of Ireland’s requirements under the derogation regimes of the International Covenant on Civil and Political Rights and the European Convention on Human Rights. The Good Friday Agreement requires steps towards security normalisation including the progressive elimination of the Acts’ provisions as circumstances permit.
“If the Government really wants to protect the safety and freedoms of the Irish people they should look towards the human security approach formalised by the 2001 UN International Commission on Human Security. This approach moves away from viewing security as being an exclusive (invariably militarist) focus on states towards the sources of daily insecurity experienced by most people such as poverty, disease, conflict, human rights abuses and economic and environmental uncertainty.”

UPROAR
Earlier there had been uproar in the Dáil when Justice Minister Dermot Ahern failed to appear to move the Government motion, sending Junior Minister Barry Andrews instead.
It was revealed that a Dáil committee dealing with separate legislation had been adjourned that morning on the basis that the Minister could not attend because he was moving the OASA motion in the Dáil.
Ahern’s real intention was revealed when Tánaiste Mary Coughlan admitted he was holding a press conference. This led to protests from Fine Gael and Labour and the Dáil was suspended several times. But despite their protests, both Fine Gael and Labour accepted the Government motion.
It was only the four Sinn Féin TDs who stood up to call a vote. Notably absent was the Government-supporting ‘Independent’ TD, Finian McGrath, who previously opposed the OASA. Aengus Ó Snodaigh reminded the Dáil of what McGrath said in 2005:
“For any citizen and democrat, repressive legislation is not the way forward. If we are serious about protecting human and civil rights, and if we are lecturing other nations on this issue, everybody should stand up and be counted and vote against this motion and this legislation.”
Green Party TD Ciarán Cuffe in 2003 said:
“The state of emergency is over... We should drop the use of the Offences Against the State Act.” He said his party “does not want to see the use of the Special Criminal Court continue”. In every subsequent year, Finian McGrath and Green Party deputies opposed the renewal of the relevant sections of the Offences Against the State Act.
An Phoblacht
44 Parnell Sq.
Dublin 1
Ireland