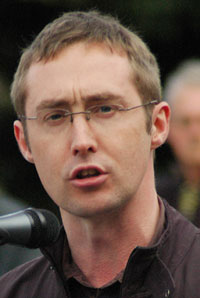 Is another treaty possible?

IS a better deal really possible? Seventy-six per cent of those who voted ‘No’ on 12 June clearly think so, according to the European Commission Gallup survey. Throughout the campaign, Sinn Féin argued that a ‘No’ vote would give the Irish Government a strong mandate to secure a better deal. The high turn-out (53 per cent) and wide margin (7 per cent) of the final result combined to give Taoiseach Brian Cowen the strongest possible hand in advance of the European Council meeting last Thursday and Friday in Brussels.
Despite the negative noises from the French and German camps, it is clear that a number of member states are interested in reopening aspects of the treaty.
Finland is reported to be interested in keeping its permanent Commissioner too. Governments or senior political leaders in the Czech Republic and Poland are indicating that Lisbon is dead.
European public opinion is also warming to the possibility of a new deal. The French daily newspaper, Le Figaro, revealed that a majority of radical left, centre left and centre right voters were all happy with the Irish rejection of the treaty.
But what did Brian Cowen do when he met his EU counterparts in Brussels at Council on 19 and 20 June? Did he call for a renegotiation of fundamental aspects of the treaty? Did he raise Irish concerns over militarisation and neutrality, public services and workers’ rights, the democratic deficit or international trade? Did he explain that, like the French and Dutch in 2005, the voters have lost confidence in the Irish and EU political elite?
No, he did not.
According to reports from senior civil servants in last Saturday’s Irish Independent, he pleaded for time and while acquiescing to pressure from the Germans and French to re-run the referendum in 2009.
Despite the fact that almost one million Irish voters said ‘No’ to Lisbon and ‘Yes’ to a better deal, Brian Cowen appeared to be listening only to Germany’s Angela Merkel and France’s Nicolas Sarkozy. Their message was blunt: accept cosmetic changes to the treaty and re-run the referendum – only this time tell your voters that it’s not about Lisbon, it’s about membership of the EU.
In much the same way as they did during the referendum campaign, large sections of the media lined up to reinforce the undemocratic message that no renegotiation is possible.
First prize for Establishment cheerleader of the week went to Irish Times Political Correspondent Stephen Collins in his Saturday opinion piece. Having uncritically accepted that renegotiation is not an option and a Lisbon re-run is inevitable, he assured his readers:
“The next referendum will essentially be about whether or not we wish to remain in the union as it is currently constituted. The voters, as well as the politicians, need to face up to that reality.”
Writing in the Sunday Independent, Gene Kerrigan caustically satirised the prevailing political and media view.  For the Establishment, argued Kerrigan:
“The result must be scrubbed, the electorate must be made feel guilty, threatened and bullied. Eventually, they may understand that in our Brave New Europe, the box that says ‘No’ is merely for cosmetic purposes.”
So are we facing into a second referendum campaign? Is a renegotiation really off the table? Is there no chance of a better deal?
The short answer is: it depends. It depends on what happens in the Czech Republic, Poland, Germany and Britain. Each of these countries is experiencing ratification problems. If one or more is unable to ratify, the ability of France and Germany to force Lisbon through is diminished.
It also depends on what happens outside the formal political circles that make up the EU institutions. If a broad-based movement for a new treaty emerges before the European Council meeting this October, it could act as a counterbalance to or possibly even block the bullying of Merkel and Sarkozy.
To this end, a coalition of political parties, campaign groups, trade unions and others needs to be formed.
The engine for such a movement must come from Ireland, France, Germany and the Netherlands. Such a coalition should demand that the Irish referendum result be respected, stand firm that the Lisbon Treaty is dead, that there can be no re-run of the referendum in Ireland, and insist that a new treaty must be negotiated.
This coalition must build on the successful ‘No’ campaigns of France, Holland and Ireland while remaining open to those on the Left who supported Lisbon but could be convinced to support progressive demands on issues of democracy, workers’ rights, public services, international trade and militarisation.
Sinn Féin has already outlined its view of what a new treaty would look like.
We are not seeking cosmetic changes but a fundamental reorientation of the direction of the European Union. We are not looking simply for protocols or opt-outs but substantial changes to the treaty itself. At the heart of our position is the demand for a more democratic, social, egalitarian and anti-militarist Europe. Other groups will have their own views and space needs to be given to these.
Such a coalition also needs to reconnect with those voters who rejected the treaty, those social forces who called for a ‘No’ vote, and those potential social and political allies whose support will be crucial if the advocates of Lisbon are to be finally defeated.
Crucially, one of the objectives of any campaign must be to force Brian Cowen to accept the outcome of the referendum and adopt a more robust position at the October Council meeting in Brussels. He needs to understand the price of ignoring the 862,415 Irish voters who rejected Lisbon.
We have three months to gather our forces, to mobilise them effectively and to build an Irish and Europe-wide alliance for a better deal: one that respects democracy, promotes a positive and inclusive vision of the future of the EU, and sees that future based not in the moribund Lisbon Treaty but in the will of the people of Ireland, France, the Netherlands, and indeed the entire European Union.