The killing of Aidan McAnespie 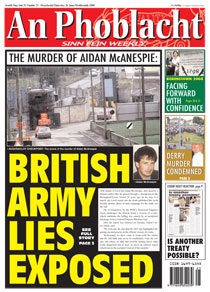 THE family of GAA fan Aidan McAnespie, shot dead by a British soldier after he passed through a checkpoint on the Monaghan/Tyrone border 20 years ago on his way to a match, say a new report into his death published this week heralds another phase in their campaign for the truth, not the end.
The investigation, by the PSNI’s Historical Enquires Team challenges the British Army’s version of events, which maintains the killing was caused by an accidental discharge from a General Purpose Machine Gun.
After the report was released on Tuesday, Aidan’s sister, Eilish, said:
“We welcome the fact that the HET has highlighted the glaring inconsistencies in the official version of events.
“Reluctantly we have come to terms with the reality that the full truth may never be established. Only the soldier and others on duty that terrible Sunday know what really happened but at least we have an official report which rejects the accepted version of the incident.”

THE PSNI’s Historical Enquiries Team has challenged the British Army’s claim that GAA fan Aidan McAnespie was fatally shot by a soldier by accident after he crossed through a military checkpoint on the Monaghan/Tyrone border in 1988.
Aidan McAnespie’s family has now called for Justice Minister Dermot Ahern to release the report of the separate Garda investigation into the killing carried out by Deputy Commissioner Eugene Crowley.
On Sunday, 21 February 1988, Aidan McAnespie was shot and fatally wounded by a soldier firing a General Purpose Machine Gun (GPMG) from the permanent British Army checkpoint at Aughnacloy. Grenadier Guardsman David Holden was charged with manslaughter but the Director of Public Prosecutions later withdrew this charge.
Holden claimed that he was moving the GPMG when his wet fingers (allegedly wet from cleaning the sangar), slipped on to the trigger, which resulted in the discharge of three shots. One of the shots struck Aidan in the back, fatally wounding him.
This week, the Historical Enquiries Team’s report said that the version of events suggested by the soldier who shot Aidan and reiterated by the British Army “could be considered to be the least likely”.
Aidan McAnespie was routinely stopped and harassed by the British Army as he passed through the Aughnacloy checkpoint on his way to work or going to the GAA club located past the checkpoint.
He had made numerous complaints to the RUC about harassment and had raised this in the media. In the minutes before the shooting, there is incontrovertible evidence that he was being tracked as he walked through the checkpoint.
Commenting after the release of the PSNI HET report this week, Aidan’s sister, Eilish McAnespie, said:
“This report vindicates our family and our long campaign for justice.
“This report should be read by the British and Irish governments, the Chief Constable, the Prosecution Service, the Ministry of Defence and the relevant authorities in the Forensic Service. And those in authority should at least have the decency to feel a sense of shame.”
Eilish also expressed the family’s “disappointment and frustration” at the refusal of the Department of Justice in Dublin to allow them access to the Garda report into Aidan’s shooting.
“Many people in Monagahan and Tyrone co-operated with the gardaí at our behest but now we are not permitted to see the report even where we requested that a redacted version be made available with all witnesses remaining anonymous.”
Backing the family’s call for the Garda Commissioner to release the findings of the Garda investigation into the killing, Sinn Féin Cavan/Monaghan TD Caoimhghín Ó Caoláin said:
“During the course of that inquiry I met with Deputy Commissioner Eugene Crowley and outlined the litany of harassment Aidan had endured. Like many others who participated in that inquiry I find it totally unacceptable that the report is still being kept secret after over 20 years.”

GUARDSMAN Holden claimed that he moved the weapon by holding the pistol grip with a  “loose grip”. As he did so, his finger slipped and he inadvertently pulled the trigger. The HET test fired a GPMG and found that:
“Activating the trigger required having a firm grip on the pistol grip and squeezing the trigger until it activated. It was found to be difficult and required considerable force to activate the trigger without having the hand firmly gripped around the pistol grip.” Holden’s loose grip explanation therefore contradicted the results of the practical test on the weapon.
Furthermore, the HET discovered that the gun was mounted on a pivot that allowed the weapon to be swivelled. Consequently, there was no need for Holden to have his hand on the pistol grip and finger on the trigger-guard since he only had to swivel the butt of the weapon on the pivot in order to reposition the weapon. In addition, another soldier confirmed that he had already repositioned the weapon.
Holden claimed that his hands were still wet from cleaning the sangar 10 minutes earlier. HET investigators have analysed the activities in the sangar that day which showed that the cleaning was conducted by a cleaning party and that Holden had resumed look-out duty half an hour before the shooting. The ‘wet hands’ scenario is difficult to reconcile with the timing of the cleaning duties.
Lance Sergeant Peters gave evidence that, on entering the sangar after the shooting and asking Holden what had happened, the reply was that he had squeezed the trigger.
Holden was not interviewed until more than 24 hours after the incident. In the intervening period he remained in military custody. There was a further 24-hour delay before the second interview took place.
The crime scene was not examined by the Forensic Service until the next day and there is no record of any crime scene protection in the interim. This would result in “crime scene evidence recovered being questionable”, according to the HET report.

FORENSICS & BALLISTICS
The gun had been dismantled and cleaned earlier that day. It has not been established why or by whom the gun was left cocked and with the safety catch off. This was totally in contravention of standing orders.
The forensic evidence concluded that a ricochet bullet which struck the ground just directly behind Aidan before it entered his body inflicted the fatal injury.
The weapon discharged three rounds and the fatal bullet was a tracer round. There is now no way of knowing whether the fatal bullet was the first or the last of three shots fired. Swab tests taken from the roadway no longer exist.
IF the first shot fired resulted in the ricochet from the fatal strike mark, then this could support the assertion that the gun was aimed at the victim or in his vicinity. The HET has since discovered that the forensic report gave no consideration to the possibility that the fatal ricochet was a result of the FIRST shot discharged from the weapon.
It should be noted that there is clear evidence that the guardsman had Aidan (whom he considered to be a suspect) under close observation as he passed through the checkpoint. However, at the moment of discharge, Holden claimed to have been physically repositioning the weapon. In other words, he claims not to have been aiming at or tracking Aidan when the shots were fired.
The HET questions “the likelihood of an accidental random discharge striking the roadway only a few feet behind what would be from the vantage point of the machine gun post a minuscule figure at a distance of 283.4 metres”.
Having weighed up all the propositions and taken all the circumstances and available evidence into account, the Historical Enquiries Team decided that Guardsman Holden’s version of events “could be considered to be the least likely”.