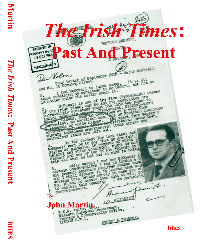 The Times, they aren’t a-changing

The Irish Times:
Past and Present
By John Martin
Belfast Historical and Educational Society
Price: €20

THIS is a book that makes you think. It does that because it contains information that some people some of the time would not like to think about. This history of The Irish Times was reported in The Irish Times on 19 April as an “alternative” history.
An alternative to what?
Well, to the notion that the liberalism of The Irish Times comes from a lineage of liberalism, openness and transparency. Admittedly, there was some messy stuff about support for the British Empire and the notion that to be really intelligent and smart and to be allowed to run things you had to be a Protestant. Also, advertising for staff with the message that only Protestants need apply. Stuff like that. Up to the 1960s, The Irish Times, and other venerable institutions like Guinness’s, had such a policy. Catholics were okay, up to a point, that point usually being a requirement to put on a suit and tie and work in ‘the office’. What a tolerant bunch Irish Catholics were. They let this go on for 50 years after the Free State was set up, in a society where they constituted the overwhelming majority. Bleeding hearts the lot of them.

AWKWARD CUSTOMER
When you read John Martin’s book, another picture emerges. The Irish Times is not that liberal, open and transparent when it comes to itself. It is a problem for newspapers and other media organisations. Let us look at you but don’t look at us too closely: we are what we do, it’s on the front page. But does reading the front of a Heinz baked beans can (or even consuming the contents) tell you much about the company that made it?
News is manufactured and journalists are employees. On papers like The Irish Times they subsume the paper’s ethos. A newspaper like The Irish Times appears to be a public institution. But in reality it is private, as private, in fact, if not more so, than the Irish Independent. Martin adroitly points out the in-house and ‘official’ histories that blend over awkward spots. A very useful correlative. It requires an ‘awkward customer’ to ask the questions since competing newspapers protect each other by the threat of ‘MAC’ – ‘Mutually Assured Criticism’. If one newspaper criticises the other’s ownership structure too closely, well it could just rebound. It just is not done. It is now for The Irish Times.
Martin’s book reveals unswerving support for the British Empire and jubilant editorial celebrations of defeat for Home Rule – so much for current lamentations on the fate of John Redmond. And, speaking of Redmond, seeing the bloodlust in the First World War editorials makes you wonder what was so wrong about the Padraig Pearse version, the one that gets trotted out ad nauseam. It is striking how enthusiastic was the celebration of shedding of Irish blood, lots of it, as long as it was being shed copiously in the service of Empire.

1916, A MALIGNANT GROWTH
The infamous characterisation of the 1916 leaders as a “malignant growth” is included, at least as fulsome a support for the executions as that offered by William Martin Murphy’s Irish Independent. The Irish Times was divorced from reality as experienced by most of its citizens.
The paper did not even support the Irish Parliamentary Party against Sinn Féin in 1918, apart from a single exception, Willie Redmond in Waterford. Why? Because of his “faithful service” in the British Army and because no unionist was standing. Whatever the disagreeable outcome, mother England would sort it out. Not exactly democratic, if Irish democracy is the starting point.
It took The Irish Times a long time to adjust after 1922. For a newspaper with a liberal reputation it was quite old-fashioned, a sectarian enclave operating on the basis that intolerance, like halitosis, is what the other fellow has.

GAGEBY GOES ‘NATIVE’
There was an exception; every rule has one. Douglas Gageby took over as editor in 1963. The last Protestant editor of The Irish Times was its most republican. He dragged it into the mainstream of Irish life and adjusted it to the mood for change in the 1960s. In the South, people wanted freedom from censorship, freedom for women, less sectarian control over education, health and private morality. In the North, nationalists wanted to be free from discrimination and repression. They wanted jobs and houses, the things unionists denied them. Gageby, a Wolfe Tone republican, wanted those things too.
Reform happened in the South because Irish nationalism is democratic. In the North, it was stopped in its tracks by a violent, sectarian and reactionary unionist state. Nationalists had had enough. They had endured enough. The terror that subdued them in the past no longer terrified them. Television showed the pictures and The Irish Times wrote the words. It was a different paper in those days.
According to the highly experienced British ambassador to Dublin in 1969, Sir Andrew Gilchrist, “the five Protestant owners of The Irish Times... are increasingly concerned about the line the paper is taking under its present (Protestant, Belfast-born) editor, Gageby”. Gageby, he continued, was “a fine journalist, an excellent man, but on Northern questions a renegade or white nigger”. How did Gilchrist know of Gageby’s betrayal of his caste? Thomas McDowell, one of the five owners, told him.
Major Thomas B McDowell reported to the Ambassador, who duly informed his superiors in London. How do we know this? Letters on the subject were released by the British Public Records Office in 2000. But we had to wait until 2003 to see sight of the infamous ‘white nigger’ letter.
The Irish Times had reported other letters in 2000 in an anodyne and misleading manner. What happened to the letter that should have been the major news story of the new century? An Irish historian sat on it to ensure that it would not be reported. He would be damned if he was going to publish that! It was one of Irish history’s awkward spots. The book contains the strange story of how the letter was found and how The Irish Times refused to publish it.
Martin has the advantage that he is also an accountant. He reveals strange stuff about The Irish Times’s ownership structure. If it happened to a Taoiseach, there would be a tribunal to investigate it.
This book tells the story of the intimate relationship of The Irish Times to Irish history. Read it.