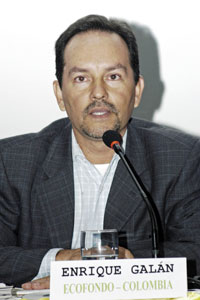 ALTHOUGH water is absolutely fundamental for life to exist, over 1 billion people in the world lack safe access to clean water and 25 million people in the world die every year as a result of contaminated waters.
In Latin America, despite having 55 per cent of the world’s total renewable water resources, 100 million people live without access to safe water. Recent waves of privatisation of water in countries such as Chile, Argentina, Uruguay, Bolivia and Colombia have often made matters worse, with massive increases in water rates, illnesses and death from contaminated water.
This situation has sparked massive demonstrations such as the ‘Water Wars’ in Bolivia and has forced some administrations to rescind the contracts to multinationals that were reaping huge benefits from water privatisation while delivering very poor service or no service at all to the vast majority in want.
However, water privatisation is not only taking place in developing countries, as families living in England and Wales well know.
In the first week in April, activists based in Latin America, Italy and the Netherlands came together for Ireland’s Latin America Week to speak of their experiences of water privatisation as they signalled that the introduction of water charges in schools, hospitals and nursing homes in Ireland is just the first step towards the sell-out of a basic human right: the access to water.
In fact, the principle of liberalisation of services, which is contained in the Lisbon Treaty, and the concept of distorted competition would open the door (if the treaty is passed in the Irish referendum) to privatisation of water in all of the EU as public water services could be denounced as ‘distorted competition’ by corporations. Also, the so called ‘liberalisation’ of services is part and parcel of any trade agreement – or even aid package – being offered by the European Union to developing countries. This approach shows the lack of respect of governments for human life, so dependent on water, and how their policies are not so much about people as about business.

ECO SYSTEMS
During his stay in Ireland, Enrique Galán, a leading member of ECOFONDO, a Colombian environmental organisation, spoke about the cultural and spiritual value of water for indigenous people in Latin America.
He told also how the increasing pressure of wrong development models are endangering not only the future of the most vulnerable groups in developing countries that depend so much on their eco system for the production of oxygen and rain.
“Sixty per cent of our body is made of water.  Seventy to 80 per cent of our brain is water, and when the human body loses 2 per cent of its water, it loses some of its mental capacities. So imagine what control a company that controls water may have over all of us.”
Galán also criticised a development process based exclusively on profit which is being forced upon Latin America by international financial institutions. “In 2005, 36 per cent of world investment and contracts were directed to Latin America with conditions of privatisation and soaring tariffs imposed on citizens.”
This is why ECOFONDO is campaigning for access to water as enshrined in the Colombian Constitution, as has happened in Uruguay and Bolivia.

INEQUALITY
Ricardo Buitrón, from Acción Ecológica, an Ecuadorian ecological organisation with existing links to Ireland, said that in the issue of global water management there is a repetition of the trend towards inequality that keeps international markets ticking over.
“The so-called developed countries consume 80 per cent of the resources of the planet while developing countries fuel this model of development by feeding the North with raw materials and natural resources. This development is destroying the planet.”
As Buitrón points out, Latin America has 80 per cent of the world’s water but only consumes 10 per cent. In global figures, 12 per cent of the world’s population uses 85 per cent of the water.
“If water was distributed equally among all the planet’s inhabitants, it is possible all of us would have access to drinkable water. But despite holding the biggest water reserves on the planet, we hold 560 million people with no or not enough  access to water. Ecuador only consumes 10 per cent of the water available in the country but 65 per cent of the population has not access to water.”

MODEL OF RESISTANCE
The resistance to water privatisation has already found its model in Latin America.
Eight years ago, the citizens of Cochabamba, in Bolivia, took to the streets to protest the water rates hikes and end of services for those who couldn’t pay. They managed to expel water corporation Bechtel. Six years after the company left, water supply in the city has improved and more citizens now have access to drinking water. However, the World Trade Organisation’s tribunal, the International Centre for Settlement of Investment Disputes, is filing a case against the citizens of Cochabamba on behalf of the corporation that deprived and fleeced them of their water!
What really angers  Giuseppe de Marzo, spokesperson of ASUD, an Italian association promoting global solidarity between the global South and North, is the fact that Milan’s public water company finds itself involved in the court case against the citizens of Cochabamba because of the public/private partnership model that the Italian Government is forcing in relation to public services. And the trends of privatisation are always the same: increasing water rates, workers losing their jobs, and poor investment and maintenance of the infrastructures.
ASUD has also participated in the mobilisation against water privatisation in Italy, where it has collected 500,000 signatures against it and managed to stop the passing of the legislation that would allow privatisation to go through the Italian parliament.
De Marzo states that the privatisation of water and other basic services is a question of democracy and, as such, citizens are entitled to water access and to resist privatisation. And there is no need to look at Italy or Latin America for an example of the effects of privatisation of public services. England and Wales are suffering the ‘benefits’ of the privatisation of water services.

ALTERNATIVES?
So, what are the alternatives?
Satoko Kishimoto works for the Transnational Institute (TNI) in Amsterdam, in its Water Justice Project.
The Water Justice Project advocates alternatives to water privatisation such as progressive public water reforms and public/public partnerships as the key elements for solving the global crisis in access to clean water and sanitation.
“Public does not only mean public authorities or utilities – it should include people’s participation. It is all about accountability,” explains Kishimoto while dismissing the idea that private means effective.
“They say that private is effective, transparent. That is not right. All experiences of privatisation were not efficient and they do not fulfill the contract. On the other hand, public is inefficient in many parts of the world. In many instances this is because of lack of money. But if the services have enough support from the authorities, they have a capacity to reform and improve with people’s participation.”