'No' to Lisbon - public meetings in Monaghan and Roscommon 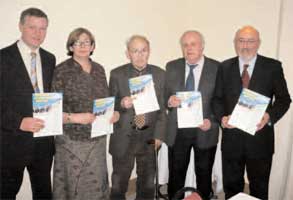 Sinn Féin continued with its series of public engagements on its campaign against the Libson Treaty with meetings in Strokestown, County Roscommon on Thursday, 24 April and Casteleblaney, County Monaghan on Monday, 28 April.
Informative and interesting contributions led to a commitment by those in attendance to campaign vigorously for a ‘No’ vote in the upcoming Referendum.
An estimated 50 people attended the meeting in Strokestown. Speakers on the night included Sinn Féin Dáil leader  and Cavan/Monaghan TD Caoimhghín Ó Caoláin, Leitrim County Councillor Martin Kenny and Roscommon Councillor Michael Mulligan.
In Castleblaney the implications of the treaty were spelt out in detail by local TD and, Caoimhghín Ó Caoláin; the party’s Dublin MEP, Mary Lou McDonald and Roger Cole of the Peace and Neutrality Alliance.  A lively questions and answers session followed.
An Phoblacht
44 Parnell Sq.
Dublin 1
Ireland