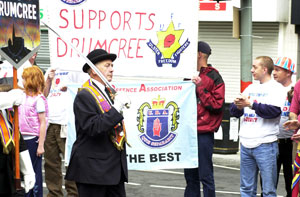 THE right to live free from sectarian harassment, as enshrined in the Good Friday Agreement, must be upheld, Sinn Féin’s John O’Dowd has said. The Upper Bann MLA was commenting on the publication of an interim report by the Strategic Review of Parades.
The strategic body, tasked to review the work of the Parades Commission, is chaired by the former leader of the British Liberal Democrat party Paddy Ashdown and is scheduled to publish its full report in the autumn.
Consideration of the report’s recommendations are subject to the successful conclusion of the transfer of power on policing and justice to the Assembly and Executive.
“Sinn Féin does not envisage a situation where OFMDFM would consider taking responsibility for parades in the absence of this,” said O’Dowd.
O’Dowd was speaking after residents’ groups raised a series of concerns following the report’s publication, particularly the possibility of “politicising” what is essentially a human rights issue.
“This is an interim report. We will study the full findings in the autumn and respond to its recommendations then. What is clear is that the resolution of controversial marches will continue to operate within the current legislation and with the Parades Commission with a central role in the time ahead,” said O’Dowd.
“Experience teaches us that the resolution to the issue of contentious parades lies in dialogue between host communities and the Loyal Orders. Such a process must be central to any system of resolving these issues.”
“The report does contain recommendations including a legally enforceable code of conduct. We will of course want to see the terms of such legislation before passing judgement on its potential effectiveness to curb abuses and sectarian harassment,” said O’Dowd.
However the Lower Ormeau Concerned Community Group and the Garvaghy Road Residents’ Group said they feared that the proposals “will lead to a pre 1998 situation”.
The groups said they were concerned that “political expediency will take precedence over valid human rights issues”. They were also concerned that the review body may attempt to downgrade “the right to freedom from sectarian harassment”.
The groups pointed out that it was political interference by a former British Secretary of State that underpinned the difficulties of the present Parades Commission.
“Corruption by Peter Hain and the NIO of the appointments process led to a two year legal battle that culminated in the House of Lords upholding the residents’ case that those appointed were indeed biased and unlawful,” they said.
Although they did not agree with all of its determinations, the Parades Commission had succeeded in “changing the climate around such contentious parades” said the residents’ groups.
“The rerouting of sectarian marches away from the Garvaghy and Ormeau Roads by the commission has meant our communities and the wider community have enjoyed successive peaceful summers,” they said.
But speaking at the launch of the interim report, member of the review panel, senior republican Sean Murray urged people to study the document in detail before making up their minds.
“Unfortunately there has been a lot of speculation about the contents of this report, some of which has been highly misinformed,” he said.
“It is an interim report and there will be a further period of consultation in which people can come in and deal with their concerns. Nothing is written in stone and it’s important that message gets out to the general public,” said Murray.
“I have been talking to people on the Ormeau and Garvaghy Roads and that dialogue will continue. Their concerns will not be ignored.”
“If you want to resolve the issues surrounding parading you have to resolve Drumcree and the Ormeau Road. That’s the challenge for this body and this consultation process,” said Murray.