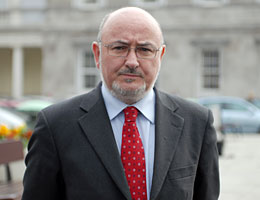 Despite an establishment media consensus critical of his remarks, Caoimhghín Ó Caoláin’s statement in the Dáil last week has met with a positive public response

THERE has been much media comment about the contribution of Sinn Féin Dáil leader Caoimhghín Ó Caoláin during statements on 23 April marking Bertie Ahern’s last Dáil working day as Taoiseach.
While Establishment media commentators were critical that his remarks ‘missed the mood of the House’ there has been a positive public response with Sinn Féin members receiving encouraging feedback.
Fianna Fáil is enjoying the benefits of a virtual political truce courtesy of Fine Gael and Labour for the past month since Bertie Ahern announced he was stepping down and as they all campaign on the ‘Yes’ side in the Lisbon Treaty referendum.
With Brian Cowen due to be elected Taoiseach next week, Sinn Féin is stepping up its opposition, especially to the cuts in public services.
We carry here the full text of Caoimhghín Ó Caoláin’s Dáil statement.

BA mhaith liom mo dea-ghuí pearsanta a chur chun an Taoiseach agus é ag éirí as oifig. Is léir go bhfuil moladh tuillte aige as ucht a ndearna sé chun próiséas na síochána a chur chun cinn agus chun Comhaontú Aoine an Chéasta a chur le chéile. Bhí sé i measc siúd a bhí chun tosaigh ag cruthú ré nua síochána sa tír seo. Níl an obair sin thart go fóill.
I join in the personal good wishes to the Taoiseach as he prepares to participate in his last session of Taoiseach’s questions in the Dáil. I have been participating in Taoiseach’s Questions since my election in 1997 and I commend the Taoiseach on his courtesy which was consistent over the years. His clarity was a different matter but if we crossed swords on many occasions it was never personalised and so it shall be today.
The outgoing Taoiseach’s contribution to the development of the Irish Peace Process was very significant and deserves full acknowledgement. He built on the work of his predecessor, Albert Reynolds, and played a key role in the negotiation of the Good Friday Agreement. We have a consolidated peace process and a developing all-Ireland political process. That will require continued commitment from all of us and renewed energy from the Taoiseach’s successor, the Tánaiste, Deputy Brian Cowen. I say a sincere ‘well done’ on the Taoiseach’s role in that historic process, which alone guarantees his place in the history of our country.
I do not want to spoil the bonhomie this morning but I cannot participate in a back-slapping exercise in isolation of the consideration of the record of governments led by the Taoiseach over the past 11 years. I repeatedly called on him to resign primarily because of the disastrous state of our health services over which he has presided. Despite all the successes that are rightfully being attributed to the Taoiseach this morning, that failure has overshadowed his role as head of government for over a decade. He and the Government have failed completely to deliver an equitable, efficient and truly reformed public health service.
I listened to the Taoiseach’s reply yesterday to the question put by Deputy Kenny on Leaders’ Questions and I wondered how he had become so disconnected from the reality faced by so many of our citizens today, how he had turned his back on the people of Monaghan and elsewhere and had never visited our beleaguered hospital or shown an iota of care for the plight of those who have depended on its services. These are serious matters. This week, sadly, the two coincide as the clear indication of the closure of our hospital as an acute facility has been signalled to take place before the end of this year.
We see the results all around us and, as the Taoiseach leaves office, patients in the public health service are again suffering from Health Service Executive cutbacks that hurt the old, the sick and the disabled. Our local hospital, like so many in the network, is being devastated. Pharmacists are pulling out of state medicine schemes and the public health system is being allowed to crumble while the Government promotes the private for-profit health business. Tomorrow morning, the Minister for Health and Children, Deputy Harney, will officially open a public health conference with participants paying over €500 per head to attend. On 24 April 1916 – an important date of which I know the Taoiseach is well aware – the Proclamation of Independence was declared; on 24 April 2008, the privatisation agenda is being furthered.
The stepping down of Deputy Bertie Ahern as Taoiseach will mean little if it does not prompt a new direction in Government policy. That would require a beginning to the delivery of a truly equitable health service, prioritising education and other public services and abandoning the privatisation agenda. The departure of the Minister for Health and Children with the Taoiseach would help but of itself it not would be enough. What we need is a change in policy.
The departure of the outgoing Taoiseach is undoubtedly the end of an era in terms of political personalities. In his own terms and those of his party, he was extremely successful – I acknowledge he was so on several fronts – but only a fundamental realignment in Irish politics, ending the domination of conservative influences and parties, can bring about real change. Having said that - and this is not the first time I have put these views on the record here – I again make the point that personally I hold the Taoiseach in high esteem and I take the opportunity to wish him peace and contentment for all the years before him.