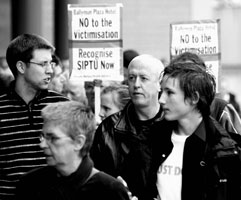 TODAY (Thursday, 1 May) 40 workers at the Ballymun Plaza Hotel will hold a rally the highlight the fact that Ballymun’s regeneration has been built on the backs of the taxpayers and local people like themselves, who were given low paid employment by fly-by-night developers.
Over 5,500 local people have signed a petition calling for the reopening of the Ballymun Plaza Hotel. Workers and their union, SIPTU, will be demanding that the policy of allowing low-paid, insecure jobs to become a hallmark of urban regeneration schemes must end. It is unsustainable, self-defeating and damaging for communities such as Ballymun which have suffered enough setbacks already.
The workers want justice for themselves and their families and they want to ensure the mistakes made in Ballymun are not repeated in Moyross and other regeneration projects.
Sinn Féin Councillor Dessie Ellis criticised the management and owners of the Ballymun Plaza over the hotel closure which followed on a dispute between the owners and the management company responsible for the day-to-day running of the hotel.
Speaking previously on the issue Ellis said the Ballymun Plaza workers have been treated in a “deplorable manner” and are the victims in a dispute between developers and management.
“There was no notice, no consultation and no consideration given to the workers who have dedicated themselves to making a success of the hotel.”
Ellis called on management and the landlords to resolve the issue and to re-open the hotel immediately.
“Failing this a third party should be invited to take over the day-to-day operations provided they guarantee that the existing workforce is rehired in its entirety, and that all monies owed to the employees will be paid out.
“This hotel was an integral part of the Ballymun Regeneration programme, both as a local amenity and as a source of much needed local employment. I am calling on the government to get involved in saving the hotel and the jobs”, he said.
An Phoblacht
44 Parnell Sq.
Dublin 1
Ireland