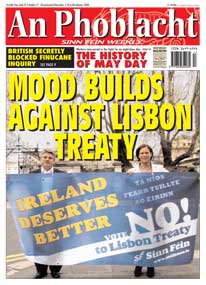 THE political establishment in the 26 Counties has been shaken by the results of last weekend’s Red C opinion poll which showed a dramatic swing against the Lisbon Treaty, with the ‘Yes’ side leading by just 6 per cent when undecided voters are excluded.
The Red C poll in The Sunday Business Post says that among those entitled to vote, 35 per cent are backing the treaty, a fall of eight per cent since the last poll two months ago.
Almost a third (31 per cent) are decidedly opposed to Lisbon, an increase of seven points, while another third of voters, 34 per cent, “don’t know”.
When those undecided are excluded, the ‘Yes’ side leads by 53 per cent to 47 per cent, a very narrow margin with seven weeks to go to polling.

FARMERS
The swing against the treaty is particularly marked among farmers, according to the poll.
Irish Farmers’ Association President Padraig Walshe said this is not surprising as farmers are concerned at the position adopted in the World Trade talks by EU Commissioner Peter Mandelson which would adversely affect Irish farmers’ livelihoods.
Sinn Féin Dublin MEP Mary Lou McDonald described the latest Poll results as no surprise.
“Proponents of the treaty have been unable to convince voters of any merits to the treaty because there simply are none.
“Cover-up tactics by the Irish Government and EU institutions have not succeeded in halting debate on what the Lisbon Treaty means for Ireland. Farmers throughout Ireland are experiencing first-hand what life will be like after Lisbon.
“Small businesses are questioning how tax harmonisation across the EU will affect them. Vulnerable workers know all too well that the race to the bottom that the Government, EU, Fine Gael and Labour promised them would not happen after Irish Ferries has already begun.
“No amount of veiled threats and talking up of this treaty by European and Irish political institutions can disguise the simple fact that it does not address the economic and social needs of Europe.”

The ‘unknown unknowns’ on Lisbon

AS the Referendum Commission gave its first briefing this week, its own research survey confirmed the findings of numerous other opinion polls which is that the Irish public know little about the details of the Lisbon Treaty.

With just 50 days to go before voting on Lisbon, only 5 per cent of Irish voters believe they understand the treaty. It confirms other poll findings by Red C and TNS mrbi that only 6 per cent and 12 per cent of adults respectively “understood” or were “satisfied with their knowledge” of the Lisbon Treaty.
The TNS mrbi Irish Times poll was published on 26 January 2008 while the Red C Irish Sun poll was published on 14 April, and now we have a triple lock with the Referendum Commission data proving conclusively the massive confusion in the electorate about this new treaty.
This confusion is nothing new and has been consistently registered in previous Euro-barometer polls on the EU Constitution Treaty since 2005. The Irish public has been in the dark on EU constitutional change for over four years and during this time Government parties have done nothing on the issue except systematically deny and decry those in the ‘No’ camp.
However, the consequences of this policy of deliberate confusion on the EU Constitution itself, its rejection by the French and Dutch electorates in 2005 and then the supposed reform process afterwards has brought unforeseen problems for the Irish Government now gearing up to campaign on the treaty.

JUMP FOR THE ‘NO’ CAMP
Last weekend’s Red C Sunday Business Post poll showed that while “don’t knows” had stood still there had been a slippage in support for the Lisbon Treaty and a significant jump in vote share for the ‘No’ campaign from 24 per cent to 31 per cent.
The next question is how this fits in with the TNS mrbi data which has shown support for the treaty sit at 26 per cent in January, virtually unchanged from a 25 per cent recorded in October 2007. The TNS mrbi data shows the ‘No’ vote at 10 per cent in January with a massive 64 per cent registering as “don’t know” or having no opinion. This seemed to be backed up by the Red C Irish Sun poll in early April that had 28 per cent for the treaty, 12 per cent against and 60 per cent undecided.
One explanation is that ‘No’ campaign has the most momentum right now as the actual date of the referendum looms and voter intentions harden away from “don’t know” to ‘Yes’ or ‘No’ (though this hasn’t been shown in the Red C poll).
For now though we are in a Donald Rumsfeld-style paradox of the “unknown unknowns” and the 45 per cent support for the EU Constitution in 2005 registered by TNS mrbi now seems like a pipe dream to the pro-treaty parties.