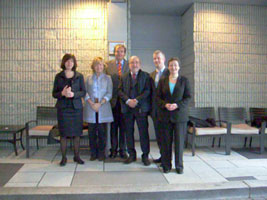 A DELEGATION from the European Parliament Temporary Committee on Climate Change, including Sinn Féin MEP Bairbre de Brún, have visited Washington this week.
The delegation, led by the Committee Chair Mr Sacconi,  consisted of ten members.
Last November the European Parliament Temporary Committee on Climate Change sent a delegation to China. Bairbre de Brún was also a member of that delegation. Since her election as MEP Bairbre has championed the issue of climate change at every opportunity.
Speaking from Washington de Brún said:
“The delegation that I am part of includes meetings with fellow parliamentarians, government representatives, as well as financial institutions and environmental and other civil society organisations.
“We have been discussing the best approach to tackling climate change as we seek to reach an ambitious international agreement following on from the roadmap laid out last year at Bali. Given the present attempts to bring in climate change legislation in the US and the heated discussions around the Liebermann-Warner climate bill, we heard at first hand from Senator Joe Lieberman, Senator Jeff Bingaman and Representative Ed Markey.
De Brún continued,
“Another meeting of interest included a briefing with Ambassador John Bruton, Head of Delegation of the European Commission of the United States.
“A lot is happening in the US around climate change at present. In spite of a lack of legislation at federal level, over twenty-five states have brought in legislation to promote the use of renewable energy and many states have also taken action to ensure that greenhouse gas emissions are reduced.
“In view of the public commitments given by the presidential candidates in the race for the White House this is an exciting time to be in the US to discuss climate change.
De Brún also met with John Sweeney,  president of the AFL-CIO and also chair of the Trade Union advisory committee to the OECD.  The American Federation of Labor and Congress of Industrial Organizations (AFL-CIO), is a voluntary federation of 56 national and international unions.
The AFL-CIO union movement represents 10.5 million members, including 2 million members in Working America, its new community affiliate. They are teachers and truck drivers, musicians and miners, firefighters and farm workers, bakers and bottlers, engineers and editors, pilots and public employees, doctors and nurses, painters and labourers – and more.
Speaking after the meeting between Bairbre de Brun MEP and John Sweeney, president of American Trade Union Federation AFL CIO, de Brún said:
“It was a pleasure and a privilege to meet today with John Sweeney President AFL-CIO and with Robert Baugh, Executive Director Industrial Union Council.
“We had a very worthwhile discussion on forthcoming proposed legislation on climate and energy in the US and in the EU and on AFL-CIO proposals for greening the economy and on jobs and energy for the 21st century.
I was also able to update President Sweeney on some development in terms of the green economy in the North of Ireland in advance of next month’s US investment conference in Belfast”
Ba chóir gur rí-shoiléir é do chách faoin am seo an gá chun ullmhúchán a dhéanamh d’athrú aeráide. Caithfidh ár sochaí agus ár ngeilleagar athrú de réir mar a athraíonn ár n-aeráid.
An Phoblacht
44 Parnell Sq.
Dublin 1
Ireland