The history of May Day 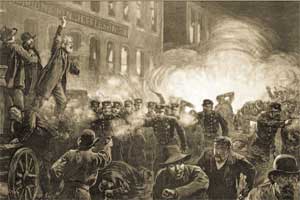 Workers of the world, awaken!
Rise in all your splendid might
Take the wealth that you are making,
It belongs to you by right.
No one will for bread be crying
We’ll have freedom, love and health,
When the grand red flag is flying
In the Workers’ Commonwealth.
— Joe Hill