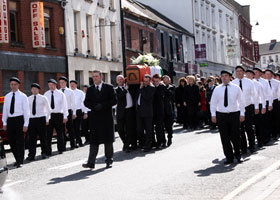 SEAMUS TRAINOR’S commitment to the ideals of 1916 never wavered through out his 88 years. His was a life that reflected the desire of the Irish people for the reunification of our country and the establishment of a 32-County socialist republic. These ideals he passed on to several generations of republican activists in Armagh City and its surrounding areas up until he passed away on Friday 28 March.
Seamus was born on 1 April 1920 in Irish Street in Armagh City. In the early 1930s, at the age of 12, Seamus joined Na Fianna. He learned to march and drill in the GAA grounds and the Old Flax Market in Armagh. Also during the 1930s, Seamus joined St. Malachi’s Flute Band.
In 1936, Eamon de Valera banned the annual Wolfe Tone commemoration at Bodenstown. Seamus was one of a group of five republicans from Armagh City who made it to Bodenstown in uniform.
By 1939, Seamus graduated to the IRA’s engineering section in Armagh City.
This unit developed its proficiency in all the weapons available to the Movement. Seamus was to describe this work as interesting and dangerous and the unit persisted in its work despite having no access to an area for safe testing of equipment. The courage displayed by Seamus and his comrades at this time was typical of the man and of Volunteers of every generation.
In the 1940s, the IRA unit in the city targeted billets for the British troops. On 11 March, acting on information from the brigade intelligence staff, a number of prospective billets was to be attacked. These included the AOH Hall, the Protestant Hall in Abbey Street and the Parochial Hall. The actions of that night were to change Seamus’s life forever. Seamus was badly wounded and sustained a number of third degree burns to his face, neck and right hand and first degree burns to his left hand and ankles. He was taken to Armagh City Hospital and eventually the RUC learned of his presence there. The staff in the hospital showed Seamus great care and he always fondly remembered a Sister Casey who took extra care of him and often ordered the RUC off the ward while she changed his bandages.
Seamus was four and half months in the City Hospital. He spent the rest of the war in jail, where he struck up life long friendships with senior republicans from across the island, including the late Joe Cahill and Gerry Adams Senior. Upon his release, Seamy returned to Armagh unbroken and as committed as ever to the struggle. He couldn’t take an active part in Operation Harvest in the 1950s but his experience was to prove most helpful to Volunteers and, under his tutelage, they were successful in a number of operations.
Following the end of Operation Harvest, Seamus next came to prominence with the beginning of the Civil Rights movement. He was a leading exponent of the cause of civil rights in Armagh and was one of the main organisers of the many meetings that took place both at Irish Street Corner and the City Hall.
Indeed, he was to be found at that same corner through the summers of 1980 and 1981 as the Hunger Strikes unfolded. As the current phase of the struggle began, Seamus was an enthusiastic supporter of the Peace Process led by Sínn Féin and he continued to provide support and advice to the current generation of Armagh republicans through the sometimes complex and difficult times it has brought.
Giving the oration at the funeral of this dedicated republican, Sinn Féin MLA Cathal Boylan said:
“Seamus Trainor was an inspirational figure for the Republican Movement in Armagh.  His influence has been felt by several generations of republican activists in the city and by our enemies.
“We are proud to have known him and, on behalf of the Republican Movement and Sínn Feín, we wish to express our sincere sympathy to his family and assure them that we too will carry the name of Seamus Trainor in our hearts forever.”