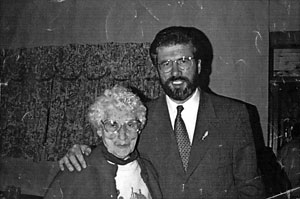 THE 20th of February was a cause of mourning for many republicans throughout Ireland as it saw the passing away of Ellie Lyden, from Condae na Gaillimhe, at the age of 100.
Ellie was born on 28 May 1907 and spent her whole life in the family home in Derrylea, just below Cregg Mountain, near Clifden. It was from here that she and her brother, Mikey, attended the local Goulane School and helped their parents farm their sheep and the few cattle.
Ellie’s family were republican and had lived through the burning of Clifden by the Black and Tans, in which two people lost their lives. Despite these acts of intimidation, the Lyden family was not found wanting when it came to supporting the local Óglaigh. Food and boarding were always on offer and an oil lamp would hang over the back door to warn activists when it wasn’t safe to come down from the mountain. Come the later years of struggle, an electric light replaced the oil lamp.
Ellie ensured that hers and Mikey’s home always remained a safe haven for members of the Movement throughout this period of struggle and beyond the untimely death of Mikey on New Year’s Eve in 1985. Activists would not only be sure of a warm bed and hot food but that they would also have the pleasure of Ellie’s quick wit and humour. Ellie, Mikey and others such as Margaret Joyce of an Clochán and Paddy Coyne of Leitir Fraic were the backbone of struggle that sustained Óglaigh na hÉireann throughout the years.
Ellie passed away peacefully in her home on 20 February and her wake and funeral saw so many of her former ‘lodgers’ return to Derrylea to pay their respects to her. Wreaths were laid on behalf of ‘OTRs’ (‘On the Runs’), ex-POWs and Óglaigh na hÉireann, Iarthar na hÉireann. She was buried in Ballinafad Cemetery in the family plot alongside her parents and her beloved brother, Mikey, with the Tricolour flying above her grave.
The respect and loyalty that so many activists felt for Ellie can be summed up from these few words from former ‘OTR’ Eibhlin Glenholmes:
“Ellie was among the humblest and kindest people I have ever met. She provided shelter and the best brown bread in Ireland for countless activists, especially OTRs. Her overwhelming love for Ireland and her unshakeable faith in Óglaigh na hÉireann were both inspiring features of this unknown heroine of our struggle. It was a privilege to have known her.”