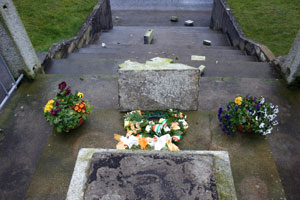 THE Edentubber Martyrs Monument on the Louth/Newry border was desecrated and badly damaged over the weekend in an attack by vandals.
The monument remembers five republicans who were killed when a land mine exploded prematurely in a house at Edentubber on 11 November 1957. The five were: Paul Smith (19), from Bessbrook; Oliver Craven (19), from Newry; Michael Watters (55), in whose cottage the fatal explosion occurred; George Keegan (29), from Enniscorthy, County Wexford; and Paddy Parle (27) from Wexford Town.
Louth Sinn Féin TD Arthur Morgan spoke of his outrage at the desecration:
“Those responsible for this attack are beyond contempt and they need to reflect long and hard upon their actions.”
Newry and Armagh Sinn Féin MP Conor Murphy said:
“Those who desecrated this monument have an agenda of causing division, hurt and provocation. There is only one proper reaction to this attack and that is to state clearly to those engaged in this type of activity that they are wrong and they will not achieve their objective of fuelling bitterness and division.”
An Phoblacht
44 Parnell Sq.
Dublin 1
Ireland