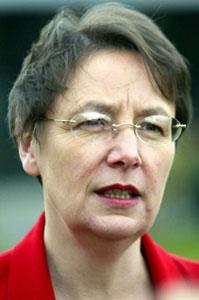 Sinn Féin MEP Bairbre de Brún has called on Commissioner designate for Public Health, Food Safety and Animal Health and Welfare, Androula VASSILIOU, to propose that Ireland be recognised as one unit in terms of animal disease.
De Brún made her comments as the commissioner designate appeared before MEPs from a range of committees to answer questions.
Commissioners are proposed by their member state but must be approved by the European Parliament before their appointment can be ratified. Vassiliou is due to replace Commissioner Markos Kyprianou who will return to Cyprus to take up the post of Minister of Foreign Affairs following the recent presidential elections there.
Speaking from Brussels on Tuesday, Bairbre de Brún said:
“Minister Coughlan and Minster Gildernew are taking forward work on an all-island Animal Health and Welfare strategy to secure and maintain a high standard of animal health and of public confidence in food safety and in animal welfare.
“Our island status has helped protect us in the past in terms of animal disease and this would be greatly enhanced in the future if the European Commission were to recognise the island as one unit in terms of animal disease. I urge the new Commissioner designate Mrs Vassiliou to give this matter serious consideration when she takes up her new post.”
De Brún also took the opportunity to wish Commissioner Kypriaonou every success in his new role.
An Phoblacht
44 Parnell Sq.
Dublin 1
Ireland