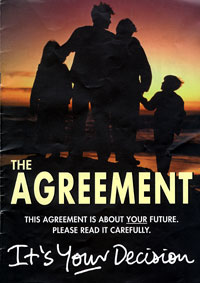 One year on from the restoration of the political institutions and 10 years after the Good Friday Agreement Sinn Féin will hold a series of public meetings to mark these historic events.
Nine public meetings will take place across the North involving party President Gerry Adams, the Sinn Féin Ministerial team in the Six Counties, the party’s Policing Board members, MLAs, TDs and MEPs.
Later on in the year a series of meetings will be held in the south.
The meetings will provide Sinn Féin with an opportunity to give an assessment of the progress made and of the effectiveness of the institutional and other changes that have been implemented.
They will also provide the public with an opportunity to engage directly with Sinn Féin Ministers and other senior party figures.
Speaking on Wednesday in Belfast,  Sinn Féin President Gerry Adams said that this direct engagement with local communities is ‘a crucial element of Sinn Féin’s political strategy of ensuring that people have a real sense of ownership of the political process.”
Gerry Adams said:
“In advance of Sinn Féin’s special Ard Fheis on policing last year, we undertook a series of public meetings with the wider nationalist and republican community in order to allow the maximum participation and debate on this crucial issue.
“The meetings were well attended; the debate was robust and comradely, and Sinn Féin reflected carefully on the contributions as we held our special Ard Fheis.
“At that time I committed Sinn Fin to organising a similar round of meetings one year on at which the party leadership would report back on the progress made on policing; as well as providing the public the opportunity to question us on our stewardship of the process.
“This April also marks the 10th anniversary of the Good Friday Agreement. The series of meetings Sinn Féin is announcing today will allow the party and the public to assess the significant contribution the Agreement has made to bringing about positive change.
“The series of meetings will also include an engagement with the families of the republican patriot dead and with victims of state murder and collusion.”
Adams added:
“Substantial progress has been made in the last year and especially in the last decade on a wide range of issues, including policing, demilitarisation, human rights and equality and more. Crucially the Good Friday Agreement, with its inclusive process and power sharing governmental structures, is the framework within which the current political institutions work.
“There are also outstanding issues still unresolved and some of these are directly affected by the process of leadership change taking place within the DUP; these include the transfer of powers on policing and justice, Irish language rights, and issues of equality and human rights.
“Despite this Sinn Féin believes that more progress will be made in the time ahead.
“Sinn Féin expects the DUP and the two governments to honour the commitments they have entered into.
“I am looking forward to the planned meetings. Last year’s were very successful and I believe that this round of meetings will be equally positive and productive.”

The times and venues of the meetings are: