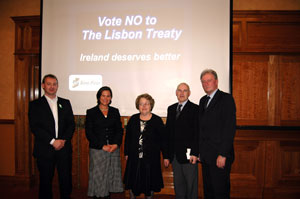 SINN FÉIN’S ‘No to the Lisbon Treaty’ campaign was launched in the south-east on Wednesday, 26 March. In a day-long series of engagements, Sinn Féin Dublin MEP Mary Lou McDonald travelled across the region, meeting with party activists and conducting media briefings on the central issues involved. The whistle-stop tour started in County Wicklow before moving on to Kilkenny and finishing in Wexford for the official public launch of the campaign.
Over 60 people attended the public launch in the Talbot hotel in Wexford Town. The meeting was addressed by the Sinn Féin MEP and chaired by Wexford County Councillor John Dwyer. Also present at the launch were Sinn Féin Councillors Maurice Roche, Noirin Sheridan and Anthony Kelly.
Mary Lou asked people to cast their minds back to the Irish Ferries dispute, where she said two wrongs were inflicted on workers.
“First, Irish workers were displaced. Then that was compounded by foreign workers being exploited. “Lisbon does precisely nothing to deal with this.”  She recalled how when this issue was being raised in the Dáil, Taoiseach Bertie Ahern sympathetically “clutched his hands to this chest and wiped his patriotic brow” and expressed how awful the situation was. Yet, she said, he did nothing during the Lisbon Treaty negotiations to ensure that this situation couldn’t arise again.
Ireland, she said, despite being an avowedly anti-nuclear country and despite our concerns over Sellafield, was giving more than €8 million each year of Irish taxpayers’ money to EURATOM, which promotes nuclear power within the EU and is specifically mentioned in the text of the Lisbon Treaty.
The Dublin MEP said the Lisbon Treaty will force us to sign up to an open-ended commitment to progressively improve our military capabilities. “So,” she said, “the same government that leaves people lying on hospital trolleys and pursues children trying to establish their right to education through the courts is going to have to spend taxpayers’ money increasing our military capabilities and making us compatible with NATO nations.
“Nowhere in the Lisbon Treaty are the rights and responsibilities of military neutrals like Ireland acknowledged,” she said.
She rejected the notion that Ireland would be isolated if it votes ‘No’, saying: “Ireland’s place is secure within the EU.” She pointed to the fact that the people of both France and the Netherlands rejected the treaty in its previous incarnation as the proposed EU Constitution and they hadn’t been isolated or excluded as a result. “Yes it may cause a few headaches in the Establishment if we reject it,” she said, “but it will just mean it will need to be renegotiated.”
Councillor John Dwyer pointed up the inconsistencies in the position of some government ministers and the arrogance of the Taoiseach in not ruling out a second referendum if the people voted ‘No’.
“People should look at the comments of Agriculture Minister Mary Coughlan on her recent return from the World Trade talks,” he said. “At the time, she rightly berated the roll of the EU commissioners in those talks, especially the role of Britain’s Peter Mandelson who, it seemed, was single-handedly trying to destroy the Irish agriculture sector. But this is a minister in a government that wants to give the likes of Peter Mandelson more power through the Lisbon Treaty.”
An Phoblacht
44 Parnell Sq.
Dublin 1
Ireland