The Good Friday Agreement : An historic and defining event 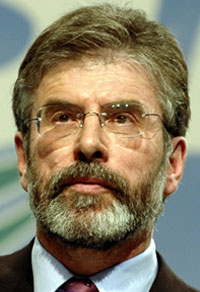 LOOKING BACK now, there are times when it is hard to believe that 10 years have passed since those momentous days in April 1998. The Good Friday Agreement marks an historic and defining point of change in the history and development of this island.
Getting to that point was fraught with enormous difficulties, not least because of the refusal by the two governments and other parties, to engage earlier in dialogue, and the determination of some to pursue an unattainable security agenda.
However, George Mitchell got it exactly right when he said that getting the agreement was the easy bit, implementing it would be another matter. And he was right. Progress since then has been slow and torturous. But progress has been made.
The Good Friday Agreement is unique. The extent and depth of the difficulties it seeks to resolve is evident in the scope of the measures it covers: constitutional issues, political matters, institutional arrangements, human rights, equality, policing, justice, language and culture issues.
As a consequence it differs in many ways from earlier efforts to reach agreement, most importantly because it is inclusive. But it also secured significantly more progress in the areas of policing and justice, equality and human rights, the Irish language, as well as constitutional and political matters, and measures to end discrimination and sectarianism, than heretofore.
As its heart, the Good Friday Agreement is about change: political, social, economic and constitutional. It is essentially about establishing a level playing field.
It emerged out of a hesitant co-operative effort by nationalist and republican Ireland, initiated by Sinn Féin, to put in place a peace process.
The goal of that peace process was to agree a political arrangement that could end decades of violence by addressing the root causes of conflict, and by allowing all of the participants to pursue their respective political objectives peacefully and democratically, and without fear of discrimination or repression.
This presented huge challenges to everyone, not least to Irish republicans who, in developing our peace strategy through the late 1980s and early 1990s, came to understand that republicans would need to take significant political initiatives to help create the political climate in which progress was possible.
The fierce opposition from within unionism and the British system to the Good Friday Agreement has stemmed from the recognition that the Agreement is a powerful instrument for change.
Its opponents fear that the achievement of equality and the entrenchment of people’s rights and entitlements will erode the very reason for the existence of the union with Britain.
The birth of the Northern state is well-known. The sectarian and political divisions that existed before partition were cemented more deeply into place after it by the unionist government at Stormont. This led to decades of institutional violence and discrimination against the nationalist community.
Tens of thousands had no vote; electoral boundaries were gerrymandered; Sinn Féin and the Republican Clubs were banned organisations; religious discrimination in housing, employment and in all walks of life was rife; and the institutions of the state openly trampled on the rights and entitlements of nationalists and republicans.
And then, 40 years ago, in 1968, the civil rights movement in the North took to the streets. It included many republicans, socialists, communists, liberals, trade unionists, community activists and others, including, initially, some unionists.
But 1968 was also the year which witnessed the violent reaction of unionism and of the unionist state to the civil rights campaign. The attack on the Civil Rights marchers in Derry in October of that year was the beginning of the slide into an escalating conflict which lasted for more than a quarter of a century.
Republicans and unionists, and British and Irish governments, played a part in that war.
It has been more difficult for some within unionism, and among elements on the British side, to appreciate and understand that we all also need to play a part in building the peace. But, despite these many difficulties, and to the surprise and delight of many, significant progress has been made.
The fact is that Ian Paisley – and who whoever replaces him as leader of the DUP – has been and will be sitting as an equal with Martin McGuinness in a power-sharing Executive in the North.
In recent months, the power-sharing Executive has agreed a Programme for Government, a Budget and an Investment Strategy. And the all-Ireland political institutions are up and running.
At the start of this year, a delegation of ministers from the Irish Government met an equal number of ministers from the North and set about taking decisions on a range of issues that will affect all of the people of this island.
But these are not the only changes to have been brought about by the Good Friday Agreement. There have been scores. Some hugely significant; others less so but all nonetheless contributing to a sea change in the political life and fortunes of the people of this island.

For example:-
•    The Government of Ireland Act 1920 was repealed, coupled with an explicit and unprecedented British Government commitment to observe the outcome of any future ‘Border poll’ in favour of territorial unity on the island;
•    The establishment of the British-Irish Inter-governmental Conference gives the Irish Government a permanent consultative role in the British Government’s daily administration of non-devolved matters in the Six
•    Counties, with a mandate to intensify co-operation in a range of areas such as rights and justice;
•    Section 75 and Schedule 9 to the Northern Ireland Act 1998 enshrines the statutory duty on all designated public authorities in the Six Counties to “have due regard for the need to promote equality of opportunity” and introduces the Equality Impact Assessment (EQIA) process;
•    Establishment of the Human Rights Commissions in the Six and 26 Counties, including establishment of a joint all-Ireland Committee of both commissions;
•    Establishment of the Equality Commission in the Six Counties and Equality Authority in the 26 Counties, followed by the establishment of a joint Equality and Human Rights Forum;
•    Establishment of the Police Ombudsman to independently investigate all complaints of police misconduct, including significant historical cases;
•    Introduction of 50:50 recruitment policy to promote representative membership of the PSNI, with Catholic membership of the full-time regulars almost trebling in last ten years from 8.3 per cent to 23.7 per cent;
•    Establishment of a representative Policing Board and new District Policing Partnerships to hold the PSNI to account;
•    Successive Police Acts (2000 and 2003) and accordingly revised
•    implementation plans to progressively enact the recommendations of the Independent Commission on Policing
•    The Bloody Sunday Public Inquiry to reinvestigate the entire case, including cross-examination of thousands of witnesses and documents, not least the most senior members of the British Government and British Army, such as former Prime Minister Edward Heath and General Sir Mike Jackson;
•    Millions of euro of ‘peace funding’ from Europe for development and community projects on either side of the border corridor;
•    Significant all-Ireland transport developments, such as: upgrading of the Dublin-Belfast Enterprise rail link, Irish Government multi-million euro investment in City of Derry airport, substantial Irish Government funding for new road infrastructure between the Port of Larne and Belfast for the east coast corridor, major ongoing all-Ireland road projects to link Dublin and the north-west, and the re-opening of the Ulster Canal;
•    All-Ireland Oireachtas Committee on the Implementation of the Good Friday Agreement (although this is insufficient, and less than the government promised, nevertheless it provides Six-County representatives with speaking rights for the first time since partition);
•    Equal recognition of victims and survivors from every background, particularly republicans and state forces, in the composition of the new Victims Commission.

These are just some of many positive changes that have been introduced as a direct result of the Good Friday Agreement.
And there will be more in the time ahead as we conclude progress on issues such as the Bill of Rights, the Irish Language Act, and the transfer of powers on policing and justice.
I am confident that we can continue to make progress on all of this.
In the time ahead, republicans will also seek to further enhance and develop our changing relationship with unionism. Already I see greater evidence at community level of unionists recognising the sense of working with Sinn Féin to overcome common problems and improve the quality of life of their families and neighbours.
And, of course, as Irish republicans our goal is to achieve the reunification of Ireland and to end British jurisdiction on this island.
This goal did not end with the formation of the Executive and the Assembly and the all-Ireland Ministerial Council and other institutional arrangements.
These institutions are part of our strategy: ‘markers’ on the road to achieving our priority goal.
I believe that we are closer to bringing that about than at any time in our past. There is growing support for Irish unity and there is a growing awareness of the importance of the all-Ireland economy to this nation’s future prosperity and growth.
But none of this will happen by chance. Republicans need to set out how we can reach this historic goal and create the conditions for a united Ireland. I have established a high-powered task force within Sinn Féin to produce a strategy to achieve this to drive forward the roadmap to Irish unity.
And we are asking all of those who support Irish unity and the right of the Irish people to determine our own future, to join with us in this extraordinary endeavour and to make it a genuine movement for change over the next number of years.
Sinn Féin has played a key role in the peace process and in bringing about the extraordinary changes that have occurred in recent years.
And Irish republicans are determined and committed to achieving greater change in the time ahead.
At no time in the last 800 years have the people of this island opened a new century with such great hope and confidence in the future.
An Phoblacht
44 Parnell Sq.
Dublin 1
Ireland