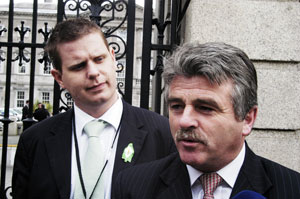 SINN FÉIN TD and Workers’ Rights spokesperson Arthur Morgan has welcomed the publication of the Employment Law Compliance Bill 2008. Morgan said the Bill was timely and that he hopes it would be debated as soon as possible when the Dáil returns from its Easter break.
Morgan said, “The rights of workers have been seriously under threat in this state for the last decade, from the use of agency workers to the lack of legislation to deal with corporate manslaughter. We have seen a number of significant steps to protect workers, minimum wage and protection from unfair dismissal being just two. However, legislation protecting workers’ rights is not always complied with and so this Bill is timely.
“It is my hope that this Bill is debated as soon as possible when the Dáil returns, because I have already received a number of lobbies concerning its contents. Along with many others, I will want to scrutinise the pages in this Bill and make sure that we are not passing legislation through the Dáil that allows any loopholes in which employment law can be broken.”