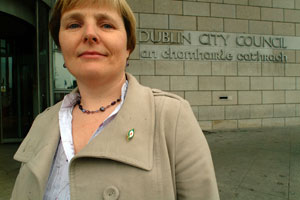 DUBLIN Sinn Féin Councillor Críona Ní Dhálaigh has successfully had a motion unanimously passed at a South Central Area Committee of Dublin City Council for British Telecom workers to have the right to join a trade union no matter where they work in Ireland, North and South.
The motion, which received cross-party support, outlined how there are 3,000 BT employees across the island of Ireland located in Cork, Galway, Limerick, Waterford, Dublin and Belfast and only those located in the Six Counties have their right to join a trade union recognised by their employer.
The Sinn Féin council motion outlined how BT refused to recognise the workers’ membership of unions for the purposes of collective bargaining and called on BT to treat its employees equally, regardless of which side of the border they reside on. Councillor Críona Ní Dhálaigh said that the motion is important in the present climate of “increasing cases of work exploitation” and shows how vital it is that the right to trade union membership is available to all. Councillor Ní Dhálaigh said that the company insisted on treating workers in the 26 Counties as “second-class citizens, denying them one of the basic human rights – trade union representation”.
British Telecom has had a presence in the 26 Counties since it acquired Esat Telecom in 2000. A few years ago, BT announced it would be directing its business in the Six Counties and the 26 Counties as a single entity on the island of Ireland. The Communications Workers’ Union is, unsurprisingly, unhappy with the current practice of company management effectively discriminating against staff in the 26 Counties by only recognising union membership for collective bargaining in the Six Counties. The management of British Telecom has continually refused to meet with CWU representatives on the issue.
The CWU has said that BT’s ruling that staff in the 26 Counties do not merit the same equal treatment as their colleagues in the North has disappointed the union and “provoked anger and frustration among the members”. It has described the attitude of the company to its staff in the South as “derisory and prejudiced.”

UNION EFFORTS
This dispute has been long and drawn out and it is understood that the CWU has continually made efforts to reach an agreement with BT on this. But BT has repeatedly refused to meet the union.
These efforts have included the union writing to BT on numerous occasions to request meetings and receiving no replies. Subsequent to this, the union wrote to the human resource director of BT in June 2006 to advise that letters of request remained without response from the company. The head of industrial relations did respond to this, however, and said that the company would open a consultation process for employees within BT Ireland but still refused to meet the CWU.
There appeared to be some hope during September 2006 when BT agreed to start informal discussions on how a relationship may be developed between the company management and the CWU in Ireland. However, the BT workers in the 26 Counties could take no comfort from this. During May of 2007 the CWU received correspondence from BT stating that it would not deal with the CWU as a representative body for its staff based in the South.
As a result of the company’s refusal to engage with the union, the CWU referred a number of cases to the Labour Relations Commission, where BT continued to deny union representation to its Southern employees. This position is unchanged. Further to this, BT Ireland has gone so far as to say that there is “no need” for trade union representation in the South as they have their own dispute resolution process in place. The company believes that their own consultation process is adequate enough to deal with employee views.
Councillor Ní Dhálaigh said:
“It beggars belief that a large multinational like British Telecom can so brazenly treat an entire group of its own staff within a single business like second-class citizens.
“The company claims publicly to run its business on the island of Ireland as a single, dynamic and innovative operation whilst its senior management operate with a philosophy that has more in common with dated imperialist notions and regressive attitudes to equal treatment than it does with social partnership or any sense of all-Ireland relationship building.”