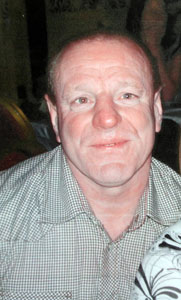 ONE of the men suspected of carrying out the weekend attack from which Belfast republican former POW Frank ‘Bap’ McGreevy died of his injuries had absconded from Hydebank Young Offenders’ Centre two weeks ago. The PSNI was told where the escaped criminal was but did nothing about it.
According to Sinn Féin Councillor Tom Hartley, community workers had reported to the PSNI that the man was recently sighted in the Lower Falls area but the police failed to act. Hartley also revealed that information was passed on to the PSNI disclosing the whereabouts of the alleged attackers after the attack on McGreevy and that the PSNI failed to follow up on this as well.
Bap McGreevy (51) was attacked at his Ross Street flat on Saturday, 15 March, by at least two assailants wielding weapons.
The republican former POW, who served 17 years in Long Kesh, suffered up to 100 wounds to his head in the vicious assault and it is thought that his attackers used a pickaxe handle and another weapon in the incident.
Bap’s 15-year-old son discovered his father lying in a pool of blood and called the emergency services. Bap was rushed to the intensive care unit in the Royal Victoria Hospital. He died on Tuesday.
The PSNI described the attack as “prolonged and vicious”.
The PSNI also confirmed that a 21-year-old man gave himself up to the PSNI at the nearby Grosvenor Road Barracks on Sunday, 16 March, and is being questioned about the attack on Bap McGreevy.

BROTHER
Bap’s brother, Martin, was critical of the PSNI’s reaction to the attack on his brother, saying that the assailants turned on two people in Clonard Street just after they fled Bap’s flat.
The pair smashed windows in houses in Clonard Close as well as damaging cars in Sevastopol Street.
Yet, according to Martin McGreevy, the PSNI, even though they could have arrested the men there and then, failed to show up.
The attack on Bap McGreey has echoes in the attack last year which saw West Belfast greengrocer Harry Holland stabbed to death by a gang of youths attempting to steal his van.
In the wake of that attack, the West Belfast community came together in an attempt to tackle the plague of anti-social behaviour in the area by confronting the thugs responsible.
In the aftermath of the attack on Bap McGreevy, Robert McClenaghan of the Divis Residents’ Association called on neighbours to stand together “to ensure the thugs don’t win”.

SYMPATHY
West Belfast MP Gerry Adams extended his sympathies to the family of Frank McGreevy.
“Bap McGreevy was a well known, popular and much loved figure in the Lower Falls community. He was a life long republican activist and served a life sentence in Long Kesh. Republicans across Belfast have been shocked and angered by the events which have led to the brutal murder of a much loved member of our community.
“I would wish to extend my deepest sympathies to the McGreevy family and in particular Bap’s children at this difficult time”,  Adams said.