Back to basics for unionists? 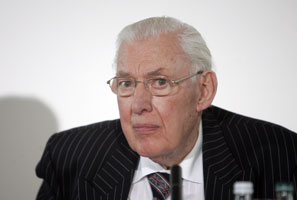 AS WE approach the tenth anniversary of the Good Friday Agreement, instability at the heart of unionism is once again threatening the political process. Less than a year since the restoration of power-sharing, the announced resignation of Ian Paisley as First Minister and leader of the Democratic Unionist Party has left not only the largest unionist party in a state of flux but also the future direction of unionism.
In the past, internal tensions within unionism were often played out in terms of greater hostility towards the Northern nationalist community. At its worst, this manifested itself through an upsurge of unionist paramilitary violence. Within the context of the current peace process, that hostility is being played out by unionist politicians attempting to thwart nationalist aspirations by holding back the tide of progressive change.
Last week, unionist politicians stalled the transfer of policing and justice powers to the North. The transfer of powers had been scheduled to take place this May but opposition from unionist members thwarted consensus within the Assembly and Executive Committee tasked with the job.

MISTAKE
Speaking after the debate, anti-Agreement unionist Jim Allister MEP, claimed the DUP’s misfortunes in the recent Dromore by-election was the reason behind the party’s refusal to endorse the transfer of policing powers. ‘Traditional unionists’ had been able to “put the brakes on the stream of concessions to republicans” the breakaway MEP said.
Clearly, the DUP had been rattled by Jim Allister’s ability to split the DUP vote. But, as former unionist paramilitary Davy Adams pointed out, it would be a mistake to over-estimate the significance of “a relatively unimportant mid-term contest”.
Predictably, the former UDA man’s solution to unionism’s political difficulties revolved around restricting political progress. The DUP had “plenty of time left to adjust”, said Davy Adams. “Indeed, the DUP has already begun to trim its sails to better suit the unionist mood,” he concluded.
But which ‘mood’ should the DUP be tailoring its decisions to address: rejectionist unionism, seeking symbolic anti-republican gestures, or pragmatic unionism, impatient for bread and butter delivery?
Unfortunately for the DUP, the nature of the power-sharing arrangements are such that, on many issues, the progress of each community’s aspirations is often inextricably linked to the other. And it’s not just down to the veto being a “double-edged sword”, as Gerry Adams pointed out last week.
Dubbed the “terrordome” by rejectionist Jim Allister, any decision to scrap the proposed sports stadium at the former Long Kesh Prison sites poses difficulties for unionists as well as republicans.
Rumours that the DUP leadership had already decided to abandon developing the site sparked outrage amongst Ulster Unionist Party politicians and unionist business figures in Lisburn and threatened to jeopardise the future of two leading members of the DUP.
UUP MLA Basil McCrea claimed the decision had not only been taken but also that it had been done in the interests of political expediency.
“The DUP needs something to exorcise the ghost of Ian Paisley before the next election and the decision to dump the Maze will give Peter Robinson the opportunity to do so.”
The Lisburn Chamber of Commerce expressed concern that the city might lose its bid for the stadium. The chamber described the proposal as “a good investment” with the potential for further development and “a catalyst for investment in the city centre”.
The project also promises to create up to 10,000 new jobs, the loss of which would likely jeopardise the future political careers of DUP ministers Jeffery Donaldson and Edwin Poots, both dependent on the Lagan Valley electorate.
Both Donaldson and Poots were forced to categorically deny the rumours and confirm that no decision had been taken. Financial and economic considerations “will obviously be crucial factors”, said Donaldson.
Basil McCrea said:
“No doubt Nigel Dodds, when he becomes Finance Minister, will attempt to say that the decision was taken as a result of financial analysis but this is not the case. The decision has already been taken for cynical party political advantage.”

VICTIMS
The UUP was not only running rings about the DUP with regard to the stadium. It was also making a bid for the rejectionist unionist vote by attempting to redefine the notion of “victim” to the exclusion of republicans.
UUP Cabinet members Reg Empey and Michael McGimpsey called upon the Stormont Assembly to change “the unsatisfactory definition of victim that exists in current legislation”.
The UUP is to propose to change the legislation’s “flawed definition” when the Office of First Minister and Deputy First Minister amends the 2006 order. The order is to be amended to accommodate the appointment of four victims’ commissioners. The notion of victims “as a result of conflict-related incidents” would be amended to exclude “those injured or killed while undertaking criminal acts or those who have received terrorist-related convictions”.
Stormont Junior Minister Jeffery Donaldson rejected the UUP inference that the DUP had gone soft on terrorism and called for the two biggest unionist parties to work together on this issue.
Rivalry to ‘out-Paisley’ Paisley was temporarily put on hold as unionist politicians came together to oppose plans by Sinn Féin Education Minister Caitríona Ruane to create a more inclusive system of post-primary education.
At a public meeting in Lisburn organised by Jeffery Donaldson to discuss the future of the transfer procedure, unionists were on the same page. UUP Education spokesperson Basil McCrea said:
“Party politics have no place in the discussions concerning our children’s future.
“Everyone should stand together now and show the minister we do not agree with her vision and that we will not sit idly by and allow her to destroy Northern Ireland’s educational excellence.”
Opposition to nationalist-inspired progress often manages to unite unionism.