Governments must move on transfer of police and justice powers 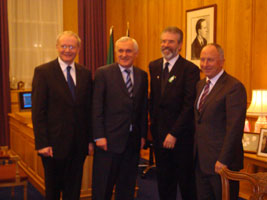 SINN FÉIN President Gerry Adams and Deputy First Minister Martin McGuinness met with Taoiseach Bertie Ahern in Government Buildings in Dublin on Monday evening, 10 March, for an hour-long discussion on the political situation in the North. The meeting focused on the issue of transferring powers on policing and justice from London to the Six Counties.
Speaking after the meeting, Gerry Adams said:
“Over the last number of weeks we have been in close contact with the Irish and British governments as we approach the deadline for the transfer of powers on policing and justice.
“Transfer of these powers into the hands of locally-elected politicians is essential for democratic control and accountability of policing.
“It is clear that there is widespread public support, nationalist and unionist, for transfer to happen now and it is something supported by the police themselves.
“The Irish and British governments need to move on this issue and implement what was agreed at St Andrew’s.”
Adams warned the DUP:
“In two months’ time a major investment conference will take place in Belfast. This is an important element of an overall job-creation strategy which is critical for the future development of the economy.
“Any suggestion of instability in the political institutions, or a refusal by the DUP to fulfil its obligations on the transfer of powers on policing and justice, or an Irish Language Act, risks undermining the investment potential of the economic conference.”
Speaking on Tuesday as the Assembly debated a report compiled by a cross-party committee on the transfer of policing and justice powers, Sinn Féin MLA Alex Maskey said the transfer of powers is vital.
“The report which is before the Assembly has received cross-party agreement in the committee. I look forward to a constructive debate in the Assembly on this issue.
“Everything is now in place for the transfer of these crucial powers away from London and into the hands of locally-elected politicians. The British Government has indicated that it has the legislation drafted and is ready to proceed. The Irish Government has publicly stated its support for this move. The completion of this report shows that the Assembly is ready also.
“All that is required now is for the DUP to step forward and show the necessary political will, for them to sit down with Sinn Féin and agree the exact departmental structure to which these powers will be devolved. This is not a massive job of work if the DUP are up for the task.
“People across all communities are crying out for effective, accountable policing. The transfer of these powers is a necessary part of making this happen. It is my hope that, after this report proceeds through the Assembly, we can press ahead collectively and complete this work.”
Also speaking in the Assembly, Sinn Féin Policing Board member Martina Anderson MLA said:
“Some unionists have argued that transfer can only happen when ‘public confidence allows’. If that is the benchmark, then transfer should happen in May 2008 because, in my view – and in that expressed in opinion polls – that public confidence in fact exists now.
“And let’s look at what the public have already entrusted us with. This Assembly is responsible for issues such as health, education and housing – responsibility for eradicating child poverty and building the kind of economy which benefits all. They have entrusted us with securing the health and well-being of their children. I ask you, what greater vote of confidence is there than that?
“And that is the confidence that Minister Nigel Dodds is selling to big American investors, telling them about the political stability that exists in the North and that the time is right for them to invest. But then, inconsistent with that, he tells people in the North that it does not exist, that more needs to be done. You cannot be a leader internationally and be a leader locally without exposing massive inconsistencies in your argument.”
The republican ex-prisoner who sits on the Policing Board said the transfer of powers will happen.
“There is little point in the DUP or others trying to delay this simply for the sake of breaking through a deadline agreed at St Andrew’s. The issues are too important to the people we all represent here for that sort of politicking to take place.
“So let us agree to press ahead with working out the small number of important issues that remain and take these powers into local hands in May as agreed at St Andrews.”