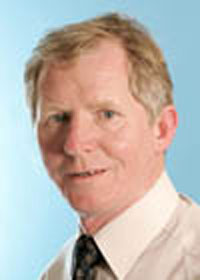 A DEATH THREAT was given to Sinn Féin Newry Councillor Brendan Curran as he left a recent meeting of the Quinn Support Group it has emerged.
Speaking at a meeting of Newry and Mourne Council on Monday, 25 February, Curran expressed his thanks to those who had contacted him to offer their support after he was issued with a threat while leaving a meeting of the Quinn Support Group in Newry City Hall the previous Wednesday night.
“I went to this meeting to very publicly once again reiterate Sinn Féin’s support for the Quinn family and their wish to see Paul Quinn’s killers brought to justice. What I sat through for the entire meeting was a ‘hate fest’ directed at myself and Sinn Féin”, Curran said.
“I have never witnessed anything so sinister and hostile. In all my years as a Sinn Féin elected representative I have attended meetings in the Council Chamber and throughout Council owned premises where atmospheres have been charged with anger, hurt and emotion, but never ever have I experienced such sinister and naked hatred.
“I was threatened leaving the Hall by a group of young men who had attended the meeting. The threat was clearly serious and something which I and my family have had to take seriously. I immediately informed the PSNI of these death threats. It is unfortunate that there are some who would try to belittle this threat and indeed justify it by offering lame and shallow excuses. That is a reflection on them and the agenda that they are pursuing.
“As I have previously stated, I, like all right thinking people want to see the killers of Paul Quinn brought before the Courts, but “Hate Fests”, intimidation and death threats, serve no purpose at all and have no place in any justice campaign”, he said.
An Phoblacht
44 Parnell Sq.
Dublin 1
Ireland