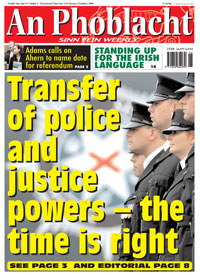 ALEX MASKEY MLA, Sinn Féin spokesperson on policing and justice issues, travelled to Westminster on Wednesday 19 February, to brief MPs, representatives of London Embassies and the media on the current situation in the political process in the North of Ireland, and in particular the issue of Policing and Justice and the transfer of powers to the Assembly.
Speaking in advance of the visit Maskey said that it was imperative that progress was made on the issue of the transfer of powers on policing and justice.
He said:
“The time is now right to proceed with the transfer of powers on policing and justice issues. The vast majority of people support the progress that has already been made and welcome the fact that local accountable politicians are now taking decisions. Policing and justice powers are a vital area of work which affects their daily lives and should also come under the control of local politicians.
“Failure to move forward could risk reintroducing an element of uncertainty into the political situation, and erode the widespread support that exists for the political institutions.
“Devolving policing and justice powers would show our confidence in the political institutions, and underline the view that the North really has moved into a new era of peace and politics.
“It is time for local politicians to make laws and effect justice and policing policy on all aspects of crime, to address issues of concern to all our communities around issues like call-out response times by the police; dealing with anti-social behaviour; death driving; sex crimes; drug dealing; domestic violence and repeat offenders on bail.
“Transferring powers to the Assembly Executive, under the scrutiny of the Assembly, would place accountability for delivering a safer society into the hands of locally elected representatives.
“Unionism should now grasp this opportunity to work with us as partners in government, to take back the “law and order” powers and give local people the ability to influence and shape our policing and justice system. The conditions exist right now. What is needed is simply the political will and political leadership.”
An Phoblacht
44 Parnell Sq.
Dublin 1
Ireland