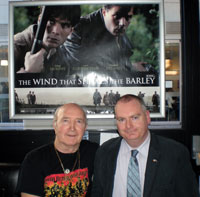 CLONAKILTY Sinn Féin Councillor Cionnaith Ó Súilleabháin was the guest speaker at a special screening in London last weekend of Ken Loach’s The Wind That Shakes The Barley by the London Socialist Film Co-Op.
The film is based mainly on events which occurred during the 1920-1922 period of the Tan War and the post-Treaty Civil War in the West Cork area and spectacularly won the Palme D’Or at the 2006 Cannes Film Festival. Last Sunday’s screening was attended by over 120 people from the progressive and trade union movement.
Among those who attended was Dunmanway native Danny Burke (pictured left with Councillor Ó Súilleabháin).
The Sinn Féin councillor introduced the film and engaged in an hour-long question and answer session with members of the audience on the ongoing struggle for freedom throughout Irish history.
An Phoblacht
44 Parnell Sq.
Dublin 1
Ireland