Standing up for the Irish language 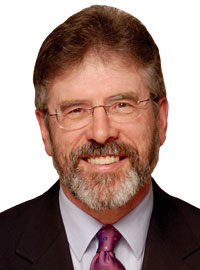 SINN FÉIN President Gerry Adams MP MLA, writing recently in the Irish-language newspaper Lá Nua, outlined Sinn Fein’s priorities for the Irish language, the party’s record on the language, and its vision for the future. Here, we reprint that important article in English

THIS April marks the 10th anniversary of the Good Friday Agreement. Before that point, the Irish language in the North was in a different place from where it is today. That is not to say that everything now is fine – it isn’t. But the growth of the Irish language in education, in the community, in its everyday usage, is greater now in this part of the island than at any time since before partition.
The Irish language is not the property of one section of people. It belongs to everyone. In the last decade, the Irish language has made great strides forward. Much of this has been community-driven and is down to the hard work and dedication of teachers, parents, Irish-language activists and others who kept Irish alive down the years.
The revival of the language has been our country’s cultural success story. More and more people are using Irish. Young children in particular are being educated in increasing numbers through the medium of Irish and it is their future and their rights that must be secured through legislation.
The key to the continued growth of the Irish language is to ensure that it is a vibrant part of people’s everyday lives.
Sinn Féin has played a part in all of this. We have worked in partnership with many of the Irish-language bodies over many years. Sinn Féin activists, many of them ex-prisoners who learned Irish in prison, have been very supportive of and active in campaigns around Irish-medium schools, businesses and the promotion of the language.
It was Sinn Féin that ensured that the Irish language was written into the Good Friday Agreement and it was Sinn Féin that put it on the agenda at the St Andrew’s negotiations and in the final agreement.
Of course, getting commitments from governments on investment in, or legislation for the Irish language is one thing getting them to honour and implement these commitments is another.
My motivation for doing this is not electoral. It is because I believe in the Irish language. Is gaelgeoir mise.
Sinn Féin is determined to build on the momentum that has been achieved in recent years. We are committed to the creation of a bilingual society. Sinn Féin believes strongly in the need to protect and promote the Irish language and all our efforts are focused on this goal.
The negative approach of Edwin Poots, the DUP’s Minister for Culture, to the Irish language, and in particular to an Irish Language Act and to the Irish Language Broadcast Fund, has understandably caused grave concern. Minister Poots has a political responsibility to the many thousands of Irish-language speakers to provide for their linguistic needs.
Sinn Féin will continue to press the minister to honour his responsibilities in this respect. Specifically, having secured the introduction of Equality Impact Assessments for the Programme for Government, the Budget and the Investment Strategy, Sinn Féin will strive to ensure that this mechanism is used to guarantee that the Irish-language sector is treated fairly and equally.
Neither has Sinn Féin forgotten that the British Government has a role and a responsibility in all of this.
Notwithstanding the inevitable battle there will be with sections of the political system who are hostile to the Irish language, Sinn Féin ministers will continue within their departments to give the Irish language the priority it deserves.
In this regard the Minister of Education, Caitríona Ruane, as with Martin McGuinness before her, has committed large amounts of funding to the Irish-medium education sector.
It is no coincidence that the greatest growth in this sector has coincided with the aggressive promotion by Sinn Féin of Irish-medium education in negotiations with the British Government and subsequently with Sinn Féin ministers.
Conor Murphy also announced this week that it is his intention to introduce legislation to allow for certain signage to have a bilingual status.
These are just two examples of the priority that is given to the Irish language by Sinn Féin.
However, we will not be complacent. Sinn Féin knows the opposition that exists to the Irish language. But I believe that, working in partnership with Irish-language activists and organisations, we can overcome this resistance and continue to make progress.
This means pressing at every opportunity the need for Minister Poots to introduce an Irish Language Act and to ensure that this legislation guarantees that: –
•     Rights are at the heart of the language legislation;
•     Adequate resources are provided to implement the Act;
•     The proposed commissioner shall have the power, staff and resources to oversee the Act.

This also means pursuing Minister Poots to provide the necessary resources to protect the Irish Language Broadcast Fund.
The Irish Language Broadcast Fund (ILBF) has been one of the success stories of the Good Friday Agreement. Although it took five years to finally get it established, it has exceeded its original target for new additional Irish-language programming and has also met the ambitious audience figures set for it.
In addition, the ILBF has fostered close links with the broadcasters TG4,  RTÉ and the BBC and is now accepted by them as an important resource. The fund has also delivered very successful training programmes, particularly for young people who have then gone on to find full-time employment in the broadcast industry.
So, a lot of progress has been achieved in the last decade. But there remains much work to be done.
At the heart of this debate and of the efforts to promote the Irish language is the issue of rights. Irish-language speakers have rights, the same rights as all other citizens, including the right to use their native language in all of their business and social activities.
All languages deserve respect and all language communities should have access to services. But the Irish language has a very particular relationship with the island of Ireland. It is an indigenous language with an unbroken historical line of being spoken here for over 2,000 years.
I remain convinced that we will secure an Irish Language Act. I believe we will continue to advance the use of the Irish language in society and that we will break down the hostility and opposition to it.
None of this will happen overnight. But with persistence, dedication and a willingness on the part of Irish-language activists to work together behind common and agreed goals, I believe we will be successful.
It is really important to remind ourselves that all that has been achieved for the Irish language has been secured without an Irish Language Act.
The credit for the resurgence of the language and of other dimensions of Irish culture lies with pioneers who set up Irish-language housing projects, schools, classes, and the support base. It lies with teachers and parents, with Irish-language activists and campaigners.
All of us are greatly indebted to these heroes.