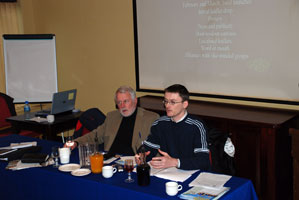 Back on the road again

OVER a hundred Sinn Féin activists from across Munster packed the Hibernian Hotel in Mallow last Sunday for the Munster Cúige AGM. Republicans from Kerry to Waterford, north Clare to south Cork, and all points in between, came to the meeting confident of the future and determined to make Sinn Féin in Munster a force to be reckoned with across the province.
The meeting was opened by Ken O’Connell, the regional co-ordinator for Sinn Féin’s newly-formed Organisational Development Unit. He said a key lesson of last year’s general election campaign is the need to improve our organisation:
“We need to build this party like never before – to make Sinn Féin a presence in every town and townland in this state. With the establishment of the ODU, we now have an organiser in every county. This is the biggest step forward this party has ever made in the 26 Counties. We now need to use these resources to systematically and scientifically build political strength. Looking at the numbers and the spirit in this room, there is no doubt in my mind that we are going to do it.”
The next speaker was Ken Ahern, outgoing Ógra organiser for Munster, who gave a presentation on youth in the republican struggle. He outlined the growth of Ógra in the province, with seven vibrant Ógra groups in Cork, Tipperary, Clare, Waterford and Limerick. He stressed the need for every activist to draw young people into the party and promote their involvement within it. He set out some of the practical ways in which this can be done.
Arnie O’Connell addressed the meeting on the importance of the Easter Lily as a symbol of national pride, independence and self-determination. He noted the efforts being made in some quarters to promote wearing the Poppy and he urged activists make sure the Lily is distributed as widely as possible and made more visible than ever this Easter.
The election of officers and cúige representatives on the Ard Chomhairle followed. Seven candidates contested the three Ard Chomhairle positions, with David Cullinane, Arnie O’Connell and Lynn Ní Bhaoighealláin being elected. Ken O’Connell was unanimously elected as cúige chair.

Paul O’Connor gave a presentation on the impact the Lisbon Treaty would have on Ireland and Sinn Féin’s reasons for opposing it. He told delegates:
“This is not about Ireland versus Europe. There are many countries in Europe where, if the people were given a voice in a referendum, this treaty would be rejected.
“This is about Irish democracy and European democracy versus the European elite. We believe you can have co-operation across Europe and give every country an equal voice. We believe you can have an effective European Union and protect democracy as well. It is better to be one voice among five million in Ireland than one among 500 million in Europe. It is better that decisions be taken here in Ireland than by opaque and unaccountable institutions in Brussels. It is better, as a small nation that knows what it is to be trodden on by an empire, to protect our neutrality and avoid entanglement in the neo-imperial ambitions of others.
“This is not just another campaign. It is about defending Irish democracy and neutrality. It goes to the heart of everything we believe in. We must fight this referendum with passion and conviction. We must get out at the doors and onto the streets, into our workplaces and communities, and persuade people to defeat this treaty.”
David Cullinane stated that the Lisbon Treaty “will copper-fasten free market policies, threaten workers’ rights and public services, and prevent us constructing a social-democratic republic, never mind a socialist one”.

After a question-and-answer session about the Lisbon Treaty, Kerry TD Martin Ferris gave the keynote address of the day. He began by declaring that everyone in the room shared a single purpose: “To end British rule in our country and establish a 32-county socialist republic. That is a huge task but it is one we are determined to see completed.”
Looking back to the cúige conference in the same room the previous November, he said he had felt confident on seeing the huge turn-out on that occasion that the party in Munster had turned the corner. This meeting made him even more certain that we are well and truly back on the road.
Quoting James Connolly, Martin said republicans must “Organise, educate, and agitate.” He added:
“We need to organise Sinn Féin in every town and townland, educate ourselves politically, and agitate against the injustices and wrongs people face in their daily lives.”
To huge applause, he concluded:
“Our political enemies have a plan to put us out of business. Fianna Fáil and Fine Gael and all those others for whom we are a bad conscience – who claim to be republicans but are nothing of the sort   – thought after the disappointment of the election that they could finish us off. They have not succeeded and they will not succeed. They won’t succeed because we know what we stand for. We know we are right and that knowledge inside us gives us the strength to keep moving forwards. The IRA withstood 30 years of killings, state collusion, torture, imprisonment, British-backed death squads, watching their comrades die, and they were not defeated. I have been inspired all my life by IRA Volunteers like Tony Ahern, Dermot Crowley and Diarmuid O’Neill, who gave their lives for this struggle. The spirit and inspiration of those IRA Volunteers is with us still. It is here in this room today. We will make sure they did not die in vain. We will keep going forward until we have united this country and established, not a 32-county free state, but a 32-county socialist republic.”
The best-attended AGM since the cúige was established concluded with activists in buoyant mood. The confidence and sense of purpose among delegates was palpable as they went back to their local areas to undertake an ambitious programme of work in the year ahead. After a difficult year in 2007, Sinn Féin in Munster is back on the road – more united, more confident and more purposeful than every before.