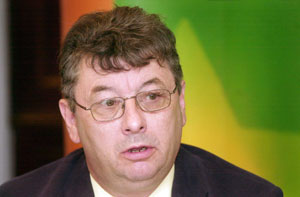 MEATH Sinn Féin Councillor Joe Reilly has obtained internal Health Service Executive documents revealing that Our Lady’s Hospital in Navan will be reduced to the status of a day hospital by mid-2009 if plans being discussed within the North-East Health HSE for services in the four counties are put into effect.
According to the information obtained by O’Reilly, crucial services are under threat and the Medical Assessment Unit (MAU), scheduled to open by July is not even mentioned, so its future could also be in doubt
Joe Reilly described the contents of the file, headed Mid-2009 View of NE Services, as “devastating”. He said:
“If this draft proposal is implemented then the HSE looks determined to run-down the hospitals not just in Navan but also in Monaghan and Louth.”
In the three hospitals – Our Lady’s in Navan, Louth County Hospital and Monaghan Hospital – HSE managers are considering keeping medicine out-patient, maternity out-patient, day case surgery, and some diagnostic services but getting rid of critical care, medicine in-patient, and surgery inpatient services. In their place the HSE could install Minor Injury Units (MIUs).
Councillor Reilly said:
“Before last year’s general election, Government parties, including Transport Minister Noel Dempsey, heralded the medical assessment unit (MAU) as a major vote of confidence in Our Lady’s by the Government and the HSE. In this document that Sinn Féin has obtained, there is no mention of an MAU being included as part of the hospital services being provided in Navan in 2009.”
He added:
“Last week, staff at the hospital were told that there were no funds available to staff the MAU; this week, there is a document that reinforces that belief.”
The Sinn Féin councillor has called on the HSE to confirm that the MAU will be completed and staffed by this July.
“Minister Noel Dempsey has made great play of the MAU. He now has to keep his promises to the people of Navan and demand of the HSE that they retain services in Our Lady’s Hospital, including the MAU. Navan cannot afford any more broken Government promises.”
“Navan and its environs has a growing population. The town needs accessible, reliable medical services for its people. Government and HSE health policy deprives it of that.”
The HSE document’s suggestions have also been criticised by Dr Illona Duffy of the Irish Medical Organisation, who said it is clear that the HSE intends to reduce both Navan and the Louth County Hospital to the status of day hospitals similar to Monaghan’s.
Even though political figures are always insisting that services won’t be cut, she said, documents such as the HSE file obtained by Sinn Féin prove that cuts are under active consideration.
Meanwhile, doctors from across the Midlands met on Monday to voice their concerns about under-funding in the health service and a shortage of resources, as well as cutbacks enforced by HSE chiefs.