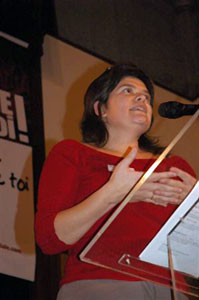 Raquel Garrido: A pro-European who wants progressive forces to restart the debate on where the EU is going

Fighting for a social Europe

RAQUEL GARRIDO is part of the left-wing of the French Socialist Party. She is also active in a broad left campaign group called For The Social Republic (PRS), set up by leading members of the Socialist Party which focuses on popular education and left unity.
When asked why, as a socialist, she opposed the EU Constitution in 2005, she explained:
“First of all, the text was undemocratic: its length, the fact that it is complicated, and the fact that it annihilated any political future for any progressive politics. It’s very hard for me to go to a constituent and ask them to vote for a socialist government if I know that what’s in that document is going to prohibit any socialist policy from functioning in my country.”
Specifically, Raquel was concerned about Part III of the Constitution: the economic policy, the prohibition on state aid and the obligation of undistorted competition.
She was also troubled by another fact.
“There is no definition and no place within the EU system where the general interest is defined. The EU defines the general interest as an idea that should be defended by the Commission, and it is opposed to the national interest that is defended by each country. But, as a socialist and as a French republican, I don’t accept that distinction.
“For me the general interest only exists as a concept if there is a physical place where an assembly, made up of representatives, can go and not defend their own interest but give their opinion of what the general interest is, and therefore create the general interest. But that place doesn’t exist in the European institutions. There is no place where the working class can work out a majority and propose a policy that is in their interest. The system is made in such a way that it will always advance the interest of European capitalism.”
With the French having succeeded in rejecting the Constitution, I asked how the return of the same text in the form of the Lisbon Treaty makes her feel.
“It’s shocking,” she said. “It’s like being the victim of a silent coup d’état. We have been robbed of our democratic right. It’s terrible. It’s brutal, very brutal.”
Once the French left realised that the newly-elected President Nicolas Sarkozy was going to try and avoid a referendum, they initiated a campaign to force him to consult the people. They ran a short campaign from September 2007. Garrido explained:
“To ratify the treaty, the French Constitution had to be changed, primarily because of the Passerelle clauses. A constitutional amendment requires three-fifths of the Congress, which combines the parliament and the senate. The left has a two-fifths blocking minority, so we had the power to force a referendum.”
With more than 400 meetings across the country, and over 120,000 petitions, the campaign attempted to ensure that all left-wing deputies, whether pro – or anti-treaty, supported the demand for a referendum. While the Socialist Party was formally in favour of a referendum, the party leadership called on its deputies to abstain. On 4 February, the Constitution revision was passed as only 170 of the 310 left-wing deputies voted ‘No’, with 130 abstaining and five voting yes. The treaty was ratified the following week.
Garrido accuses Sarkozy of deceiving people.
“Firstly, he said that the Lisbon Treaty was simplified, which was a response to the first issue of our campaign. To be democratic the population would have to have a clear understanding of what this treaty meant. So the simplification was a request for more democracy.
“Sarkozy came home last December, saying that the text was simplified, which is a total lie! He even called it a mini-treaty. But all of the substantial elements of the Constitution are in the Lisbon Treaty. It still has more than 400 articles and is actually more complicated to understand than before because then you had a merged text where as now it is just lists of amendments.
Sarkozy’s second argument, she continued, was in response for the demand for a more social Europe, which was the second big issue of the campaign. He said that he had secured the removal of “undistorted competition” from the treaty.  Again this was a lie, Raquel says, as “undistorted competition” was just moved from the aims of the treaty at the start to the protocols at the end. “So they just changed the place in the text. They didn’t change any of the other numerous places where the obligation to free competition is stated regarding services, commodities, etc.”
Asked about Irish social democrats who say that the Lisbon Treaty protects public services, Garrido is firm in the view that they have got it wrong:
“No, not at all. The treaty is a very lengthy object and it dictates many rules but some rules have more importance than others.
“There is a hierarchy. For years the European Court of Justice has held the rules regarding free competition as of a higher level than all of the others. With respect to public services, people should be aware that the term does not exist in the treaty; nowhere is that concept introduced. So while the treaty does acknowledge national practices of taking this or that sector of the economy out of competition, nonetheless, the higher value of the market always prevails. This leads to privatisation and the weakening of the involvement of the state in all of these public services.”
Garrido describes herself as a European. She passionately believes that the future of countries like France is in the EU. However, she believes that progressive political forces need to restart the debate about the future of the EU. This requires, she asserts, “changing the hierarchy of values”. “This is why we are Europeans. We are pro-Europeans. We want a new fundamental law for Europe which makes free-market competition subject to the social values and the as yet undefined general interest.”

For information on For The Social Republic see http://www.pourlarepubliquesociale.org