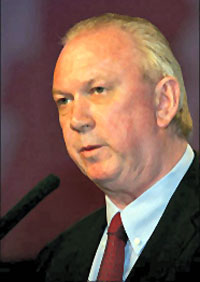 FOR the second year running, the Sinn Féin Ard Fheis is due to be addressed by a senior trade union leader: Jimmy Kelly, Irish Regional Secretary of Unite the Union.
Jack O’Connor, General President of SIPTU, and Patricia McKeown, Regional Secretary of Unison, both addressed the 2007 Ard Fheis. The trade union section was one of the highlights of that Ard Fheis.
Jimmy Kelly started out as a shop steward at Waterford Crystal and previously served as President of the Transport & General Workers’ Union (TGWU) and Chair of the T&G General Executive Council.  On taking office he pledged to work to increase trade union strength and tackle the exploitation of migrant workers.
Unite formed on 1 May, 2007 following the merger of the Amalgamated Transport & General Workers’ Union (ATGWU) and Amicus and has around 100,000 members in Ireland, making it the country’s second-biggest union. Kelly will address the Ard Fheis on the theme of ‘The Challenges Ahead for the Trade Union Movement in Ireland’.  Notably, Unite is the only major union to declare its intention to campaign against the Lisbon Treaty, with Kelly highlighting the implications of the treaty for workers’ rights and public services in recent statements.
Kelly will be speaking on Saturday afternoon, ahead of the debate on motions on the clár dealing with workers’ rights. Those motions deal with issues such as the campaign for equal rights for agency workers, which is currently a central focus for unions including Unite and SIPTU.   Trade unionists from a range of other unions are expected to attend this year’s Ard Fheis and the Sinn Féin Trade Union Department will once again have a stall where delegates will be able to get literature and membership application forms from the major unions.
An Phoblacht
44 Parnell Sq.
Dublin 1
Ireland