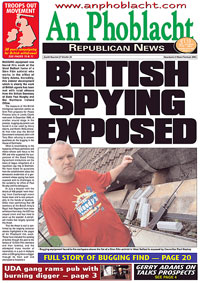 An Phoblacht, 9 September 2004 after the British bugging of Sinn Féin in Connolly House, Belfast

AFTER an announcement by Britain’s Justice Minister, Jack Straw, of an official inquiry into the alleged bugging of an MP’s interview with a suspect in prison, Sinn Féin has said that the bugging of MPs by British securocrats is nothing new.
Britain’s Chief Surveillance Commissioner, Sir Christopher Rose, has been asked to establish whether conversations between British Labour MP Sadiq Khan and Babar Ahmad, a ‘terrorist suspect’ in Woodhill Prison, were intercepted.
Police are said to have eavesdropped on conversations in 2005 and 2006, using a microphone hidden in a table. Rose will be expected to find out who authorised any such operation, which commentators have said does not contravene the long-standing, unwritten convention that MPs should not be bugged – the so-called Wilson Doctrine.
According to Jack Straw, authorisation in this case is required only from a chief police officer and that ministers played no part in the decision.

Adams and McGuinness bugged
However, it is well-known that the British Government and its agencies have a long track record of breaking the law when it comes to bugging the conversations of Irish republican MPs.
It has been reported in the British media that a Thames Valley police officer (who faces disciplinary action) took the decision to bug conversations between Khan and Ahmad and that he would claim he had his chief constable’s approval.
Ahmad, a childhood friend of Khan, is awaiting extradition to the United States, accused there of running websites supporting the Taliban and Chechen groups. He faces no charges in Britain and Khan has campaigned for his release.
Reacting to the case, Sinn Féin Policing and Justice spokesperson Alex Maskey said:
“British securocrats have a long history of crossing the line when it comes to interfering in politics, not least in this part of Ireland.
“Throughout the course of important negotiations in the Irish Peace Process there is evidence that British securocrats were ‘bugging’ the conversations of Sinn Féin MPs.
“There’s clear evidence that conversations between Martin McGuinness and Gerry Adams and with Jonathan Powell [Tony Blair’s Political Chief of Staff] and Mo Mowlam being recorded by British securocrats at sensitive times during the Peace Process. Substantial bugging devices were also discovered at Connolly House, a Sinn Féin office in West Belfast, and in a car used by the Sinn Féin president.
“There is nothing new in the claims that British securocrats routinely break the law. It is a hallmark of the British ‘dirty war’ in Ireland.”