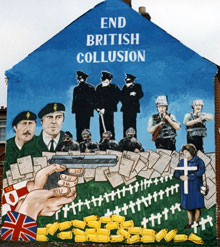 THE Irish Government has been urged to convene a meeting of all parties in the Dáil to agree a cross-party motion ahead of the Seanad debate on collusion between British state forces and unionist death squads. The issue could then go to the Dáil where a plan of action could be agreed to force the British Government to co-operate with inquiries into attacks in the 26 Counties where collusion is suspected.
Sinn Féin TD Arthur Morgan made the proposal on Thursday, 31 January, during a long-promised Dáil debate on the collusion issue.
While the debate again saw agreement across the parties in the Oireachtas, the British Government has failed to co-operate with inquiries established by this Oireachtas into attacks, including mass murder, in which there is overwhelming evidence of direct or indirect involvement by British state forces.
“Two years ago we called unanimously on the British Government to establish an independent public inquiry into the murder of Pat Finucane,” Morgan said. “This is no small matter.”
“What we need to know now is what efforts have been made by the Government, led by Taoiseach Bertie Ahern, to press this issue with the British Government. The Taoiseach has repeatedly claimed that he raises the issue every time he meets the British Prime Minister. Is that it? Are MPs in the British parliament even aware that the Dáil and Seanad have made this call? Have copies of all the relevant Barron and other reports been sent to the British parliament and have MPs been informed of their existence? Have party leaders been met and have key parliamentarians been lobbied?”
The Sinn Féin TD said that if a cross-party motion on collusion is agreed then a plan of action can be drawn up to achieve progress.
“The survivors and the relatives of the victims of collusion deserve a serious and concerted approach that goes beyond simply stating our views.”