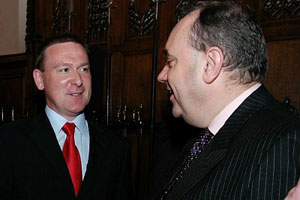 Scotland and the Connolly connection

JIM SLAVEN (37), from Scotland, is this year’s Le Chéile honouree on behalf of the Sinn Féin International Department. Of Irish descent, Jim was, as he puts it, part of “the Hunger Strike generation”, from an era that accelerated many people’s political development. In Jim’s life it sent him at an early age in search of his origins and in particular a neighbouring family, that of James Connolly. He talks to ELLA O’DWYER about the obstacles which have faced the Irish in Scotland over generations and his commitment to promoting the name and cause of Connolly.


Jim you’re of Irish descent. Can you tell me about that?
I was born and raised in Edinburgh but my grandfather, John Slaven, was from Letterkenny in County Donegal. My mother’s family (on her mother’s side) were Kellys from Tyrone. My parents, Vicky and John, are still alive and I’ve a sister, Lisa, who’s five years younger than me. I live in the same part of Edinburgh where my grandfather moved to all those years ago and actually it’s the same part where James Connolly came from. The area is called Oldtown. We lived in a place called Drummond and Connolly’s family lived in Cowgate, a stone’s throw from our home. My parents support the concept of a united Ireland and would have been sympathetic to republicanism but none of my family other than myself got involved in politics.

You left school at an early age.
Yes, I didn’t feel very comfortable at school. I came to learning much later in life. When I was 11 the big issue was the Hunger Strike of 1981 and that was very much to the fore of my mind. When things like that happen in the country that your people come from you tend to want to learn more about it all. We wore the Hunger Strike badges to school and were very aware of what was happening to the republican POWs.
In Scotland, the very notion of being Irish would be contested. The view in places like Edinburgh would generally be: if you’re born in Scotland you should consider yourself Scottish even if your family originally came from Ireland. In Scotland I’m always going to be called a ‘Fenian’ and in Ireland, because I’ve a Scottish accent, I’m always going to be called a ‘Jock’ [laughs]. There’s an issue of how immigrants view themselves. The Irish in places like America and Australia have done very well for themselves but in Scotland that has not been the case.

So the Hunger Strike triggered your interest in republicanism?
People, particularly from an older generation often ask me why I got involved in Irish politics. After the Hunger Strike the natural progression was to want to learn more about Ireland. A lot of us who went on to get involved in Irish solidarity groups like the James Connolly Society were the same age because we were of the Hunger Strike generation and that, of course, brought me to James Connolly, a man who came from just up the road two streets a way.
A group of us formed the James Connolly Society in the 1980s. The annual James Connolly march began in 1986 here in Edinburgh. It caused a lot of controversy in Scotland because it was the first time such a thing would have happened. On the first march we had a turn-out of about 300 people and that grew over the years to 3,000.

But you were very young then and you’re still young. Was all your youth taken up with politics?
[Laughs] When I was young we’d play soccer. Hibs (Hibernian) are my team  – they’re the Irish team in Edinburgh.
Historically the Irish were treated very badly here and what’s happened now is that there’s been an attempt to brush Irishness out of history. Despite the fact that the Irish are the largest and oldest immigrant community, there is scarcely any funded support centres for the Irish community here.
While people like the Scottish National Party would be in favour of Scottish independence, the majority of people here consider themselves British and unionist. But my Irish ethnicity is something I’m very proud of because in Scotland you do really have to defend it. There’s a real problem with sectarianism and anti-Irish racism here.

Did you experience harassment from the police?
In the period between 1989 and 1996 I’d have been arrested about a hundred and fifty times. It was to do with the fact that, historically in Edinburgh, there had never really been any outward representations of republicanism and they wanted to clamp down on it. So people in the Connolly Society, for instance, would have been regularly harassed.

You seem like a person with a great passion and commitment to your beliefs.
I’m still committed to the Irish Socialist Republic and to ensuring that James Connolly’s memory is celebrated in Edinburgh. Up until that first march in 1986 hardly anyone knew who James Connolly was and now everyone knows and that’s largely due to the controversy the march caused at the time.

You helped establish Cairde na hÉireann.
We set the organisation up about four or five years ago. Its aims are to campaign for a united Ireland and to support sister organisations in Ireland.
The feeling was that there had never been a national structure for various solidarity groups around Scotland so we decided to establish one national structure as an umbrella group. It still exists but I left it recently to take up a job as a community development worker, work which I enjoy very much because I can help people on the ground.

You continued your education in latter years, you said?
Because I left school early I ended up working on building sites and the like. It was much later that I got interested in education. It was really through my involvement in republicanism. I used to meet IRA prisoners who were out on parole or released and they encouraged me to read and get an education. I could see how important it was that republicans got an education so that they could articulate the republican position. So I went back to university and did a degree in what’s called Mental Philosophy. The course incorporated philosophy, logic and politics. Then I did a post-graduate degree in Community Education, which lead me to the community development work. I work with marginalised people in working-class areas.

How did you feel when you were told you were to be the honouree for the International Department?
I was embarrassed [laughs]. I don’t view it as personal but I think it’s important that all the work that’s been done here over the generations, in terms of promoting the cause of Irish freedom and addressing the obstacles facing the Irish in Scotland, be recognised. I’m very happy and comfortable with my republican involvement and the work goes on. We’re establishing a charity in James Connolly’s name with a view to helping marginalised groups here.

So you’re carrying through the James Connolly vision?
[Laughs] I wouldn’t say that but I want to take from his name and his ethos.