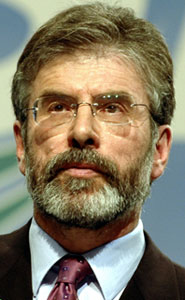 SINN FÉIN President Gerry Adams MP MLA publicly launched the party’s ‘Equality In2 Action – EQIA’ campaign at Stormont on Tuesday, 5 January, saying that Sinn Féin intends “targeting disadvantage, discrimination and poverty by maximising the effectiveness of the Statutory Equality Duty and the Equality Impact Assessment process.
The press conference was attended by Martina Anderson MLA, Agriculture and Rural Development Minister Michelle Gildernew, and Junior Minister Gerry Kelly, who highlighted progress made in securing agreement on carrying out Equality Impact Assessments on the Programme for Government, the Budget and the Investment Strategy.
Gerry Adams said that Sinn Féin works on the principle that inequality is bad for society, that equality is for everyone and that people must have fundamental civil, human, cultural, religious, economic and political rights and freedoms. Achieving this and ending inequality in all its forms is a key objective for the party.
“There is a lot of jargon around the legal processes involved in targeting disadvantage and discrimination. I have to confess at times I am uncomfortable with some of this jargon. For example, EQIA, which means Equality Impact Assessment, is the practical application of Section 75, the statutory equality duty which is intended to promote equality. These are now part of the legal framework – they are law. “
Adams said the use of mechanisms which now exist in law to challenge inequality was seen in the Executive’s decision to have the Programme for Government, the Budget and the Investment Strategy assessed centrally to see how they impact on the most marginalised.
“This means that government policy and the money it spends are being scrutinised to ensure that they are applied and used in the best interests of all citizens. This is significant progress which will ultimately benefit everyone. Sinn Féin would not have supported these measures without this agreement.”
The Sinn Féin president and West Belfast MP said that the DUP and the UUP should be commended for accepting the equality obligation.
“Many unionists now realise that equality is in the interests of their constituents. It is about tackling child poverty; it is about ending inefficiency within the health service; it is about ensuring that there is a proper and fair housing programme.”
The three Sinn Féin government departments – Education, Agriculture, and Regional Development – all completed their own focused Equality Consultation on the Draft Programme for Government which assisted, Adams pointed out, in securing more money in the final Budget for children, young people and youth services.
“So, EQIA can make a difference in the quality of people’s daily lives. For years we were told it wasn’t possible to do this. We have shown that it can be done.”