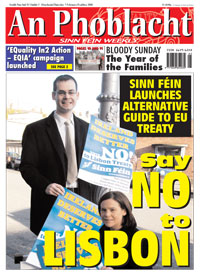 LAUNCHING Sinn Féin’s alternative guide to the Lisbon Treaty, Dublin MEP Mary Lou McDonald said this week that the referendum campaign will be very different to previous EU referenda.
“People know that Ireland’s place in the EU is secure and that it is possible to support the EU and be against the Lisbon Treaty,” she said. “People will be deciding how to vote on the basis of how this treaty will impact on Ireland. This will inform the debate for the coming months.”
McDonald was speaking at a press conference in central Dublin on Tuesday, 5 February
She said Sinn Féin believes Ireland’s place is in Europe and that co-operation with European partners is valuable and must continue.
“Sinn Féin has supported EU measures that are in Ireland’s interests in relation to Irish agriculture, the environment and equality. We welcome EU support for the peace process in Ireland and for the development of infrastructure. However, not everything has been good. This treaty is a step too far and is a bad deal for Ireland.”
She said that this referendum campaign is going to be very different to previous EU referenda. Contrary to what the Government has claimed, no matter how people vote in the referendum, “Ireland’s place in the EU will be secure”.
Mary Lou McDonald angrily rejected attempts by Fianna Fáil and Fine Gael to scare voters.
“You can support the EU and be against the Lisbon Treaty. You can support the EU and still want to see democracy and accountability. You can support the EU and still believe that our government should use their position positively and not go along with what suits the larger countries.”
She told journalists that the Lisbon Treaty referendum will have huge consequences for Ireland and it is important that there is a mature debate. “In January, the National Forum on Europe produced a summary guide to the Lisbon Treaty. Unfortunately, despite detailed discussions with them, we felt that the final document is biased and so we have produced an alternative guide to the Lisbon Treaty.
“The Lisbon Treaty is a bad deal for Ireland. It gives the EU too much power and reduces our ability to stop decisions that are not in Ireland’s interests. It cuts our voting strength on the Council of Ministers by more than half and ends our automatic right to a Commissioner. It erodes neutrality. It allows the EU to act in the international arena in the same way as a state and to form a diplomatic corps. It seriously undermines workers’ rights and public services, and it is bad for the developing world.
“Ireland deserves better.”

1.     It puts at risk our automatic right to a referendum on future changes to existing treaties.
2.     It gives the EU too much power and reduces our ability to stop decisions that are not in Ireland’s interests.
3.     It gives 105 additional powers to the EU on issues such as international relations, security, trade and economic policy – and in more than 60 of these areas we will lose our right to stop laws not in our national interest.
4.     It creates an EU Foreign Minister and common defence/military and foreign policies and allows the EU to act on the international stage in the same way as a state and to speak on our behalf.
5.     It erodes neutrality by drawing us into a common defence and obliging us to increase military spending.
6.     It cuts our voting strength on the Council of Ministers by more than half.
7.     It ends our automatic right to a Commissioner.
8.     It seriously undermines workers’ rights and public services.
9.     It mandates the EU to promote nuclear energy.
10.     It undermines the EU’s commitment to tackling global poverty and inequality.

IF the Treaty is defeated, Pádraig Mac Lochlainn said, it will:-

1)     Force our political leaders to return to the negotiating table and secure a better deal the next time round;

2)     Create the opportunity for greater democracy in the EU;

3)     Give the Government the backing with which to secure a specific article protecting neutrality;

5)     Give the Government the impetus to secure opt-outs from EURATOM, the European Defence Agency, and other contributions to EU military expenditure.