Ahern may be heading for last big gig 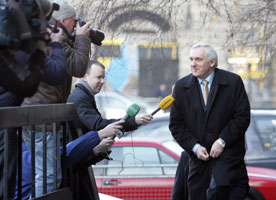 JULIUS CEASAR was told to “beware the Ides of March” and he was duly assassinated in that month. As tribunal troubles mount up for Bertie Ahern his political demise may well be approaching and if he cannot disentangle himself then his own parliamentary party may decide to desert him once he has addressed the US Congress in Washington in March.
In an interview published on Christmas Eve Bertie Ahern said that he intended to remain as Taoiseach until at least the end of 2009, leading Fianna Fáil into the EU Parliament and local elections in that year. He repeated his intention to consider his future when he reaches 60, the suggestion being that he will not lead Fianna Fáil into the next General Election if the Dáil lasts its full term to 2012.
The interview was part of a public relations drive to restore Ahern’s image after bruising encounters at the Mahon Tribunal. The Taoiseach’s effort was assisted by RTÉ with Ahern being treated like a pop celebrity on Joe Duffy’s Christmas Eve radio show and on a Late Late Show special on the boy band Westlife where Ahern shamelessly exploited his family connection with the group. His claim to have been “there from the start” with the group and to be a regular concert-goer may have been ill-judged as viewers contemplated the grey-haired Drumcondra head ensconced among screaming teenage girls.
Clearly the maximum effort was being made to exploit every possible PR opportunity over which Ahern could have control. He has no such control at the Tribunal and in the Dáil he will face mounting questions about the apparent inconsistencies in his explanations of his personal finances and those of his party in Dublin Central.

Misleading the Dáil
The most serious issue to emerge since the Dáil went into recess is correspondence between Ahern and the Revenue Commissioners on his tax compliance. This was always going to be the minefield for Ahern at the tribunal. Few people really care about his ‘unorthodox’ ways of funding his house and few are surprised at the ‘loans’ from wealthy business people. Such is the cynicism about establishment politics in the 26 Counties. But what really will damage Ahern conclusively is if it emerges that he misled the Dáil when he claimed last year that he was fully tax compliant. The correspondence revealed last weekend would seem to show that he did indeed mislead the Dáil and the public.
Ahern must now return to the Tribunal and to the Dáil with this issue hanging over his head. Even if it remains unresolved and if there is no political ‘high noon’ scenario, the continuing corrosive effect on Ahern’s public image and political standing is serious. The most telling question will be whether he can credibly claim to be able to continue the demanding role of Taoiseach while trying to disentangle himself from the mess. And the most important people posing that question will be the members of his own Fianna Fáil parliamentary party.
If the saga of Ahern’s finances rolls on through 2008, Fianna Fáil TDs, Senators and councillors will start to get cold feet. They see the local and EU Parliament elections on the horizon in the middle of 2009 and would not want a lame duck Taoiseach leading them into the contests. As always those elections will be preludes to the next General Election when TDs’ careers will be on the line. It is never wise to write off such a shrewd political operator, but if things continue as they going now for Ahern his address to the US Congress in Washington may well be his last major State occasion as Taoiseach. His next ‘big gig’ after that might just be a Westlife concert.